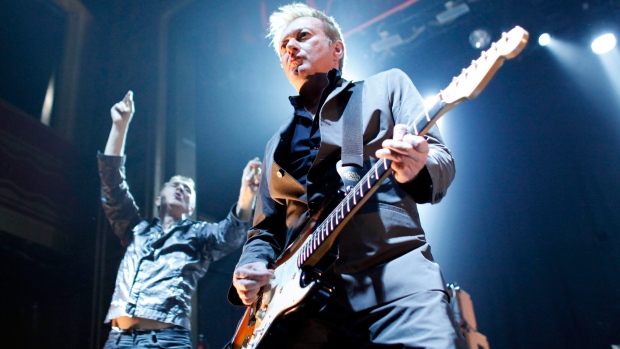 In this Feb. 8, 2011, file photo, Gang of Four's guitarist Andy Gill and singer Jon King, left, perform a concert at Webster Hall in New York. Gill, who led the highly influential British post-punk band Gang of Four, died Saturday, Feb. 1, 2020, in London, according to a statement from the band. He was 64. (AP Photo/Jason DeCrow, File)

NEW YORK - Guitarist Andy Gill, who supplied the scratching, seething sound that fueled the highly influential British post-punk band Gang of Four, died Saturday, according to a statement from the band. He was 64.

Gill died after a brief respiratory illness. “His uncompromising artistic vision and commitment to the cause meant that he was still listening to mixes for the upcoming record, whilst planning the next tour from his hospital bed,” the band said.

Gill, along with original bandmates Jon King, Hugo Burnham and Dave Allen released in 1979 one of the most seminal albums of the punk era, “Entertainment!” It was named by Rolling Stone magazine in 2003 as one of the 500 greatest albums ever.

Gill was also a respected record producer, notably working with the Red Hot Chili Peppers on their self-titled debut in 1984. Other bands he produced include The Jesus Lizard, the Stranglers and Killing Joke.

The Gang of Four's sound was a mix of rock, funk, reggae and R&B. It would greatly influence LCD Soundsystem, Bloc Party, the Futureheads and Franz Ferdinand. But Gill was not a fan of Coldplay, revealing in a 2008 interview that he found them “pompous, mawkish, and unbearably smug” and called the band the “sonic equivalent of wilted spinach.”

Born in Manchester, Gill studied art in Leeds where he met singer King. While Gang of Four never had a top 40 hit, their songs like “Natural's Not in It” and “At Home He's a Tourist” became cult classics.

The band recorded two albums and two EPs before Allen left in 1982, tired of the constant touring. The remaining members of the initial lineup recorded one more album before calling it quits in 1984. King and Gill recorded two albums in the 1990s as the Gang of Four. Gill has the last original member to tour with the band's name.

The latest lineup included John Sterry, who joined Gang of Four in 2012, bassist Thomas McNeice and drummer Tobias Humble. The band said “we'll remember him for his kindness and generosity, his fearsome intelligence, bad jokes, mad stories and endless cups of Darjeeling tea. He just so happened to be a bit of a genius too.”

Gill's wife, Catherine Mayer, tweeted: “This pain is the price of extraordinary joy, almost three decades with the best man in the world.”