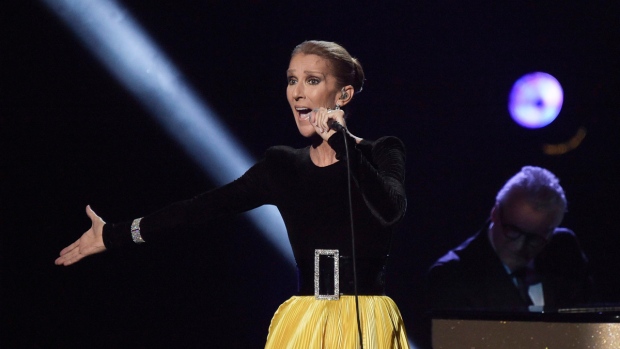 LAS VEGAS -- Celine Dion belts out an impassioned version of the toddler favourite "Baby Shark" and gives away pairs of her shoes in especially offbeat edition of "Carpool Karaoke."

The vocal powerhouse joined late night TV host James Corden as he drove around the streets of Sin City, performing spirited renditions of her biggest hits for a segment that appeared Monday on "The Late Late Show."

The 15-minute sketch covered plenty of ground, including Dion's penchant for singing in conversations and a rendition of her iconic hit song, "My Heart Will Go On."

"I just have a day off once a year, and you caught me on that day," the Quebec superstar jokes as she jumps into the passenger seat.

From there, Dion sets forth across the strip with Corden at the wheel. She pounces on every opportunity to answer his questions with the hook of a classic pop song.

"Are you excited for this?" he asks as Dion responds with the chorus of the Pointer Sisters hit "I'm So Excited."

A few minutes later, he challenges the songstress to imbue the viral kids song "Baby Shark" with the stirring emotion she's known for, complete with her trademark chest pound.

Corden eventually brings up Dion's colossal shoe collection, which she estimates at between 3,000 and 5,000 pairs. Corden interjects with rumours it's closer to 10,000.

Corden then pressures her to part ways with a few shoes he's tucked in the backseat. She reluctantly obliges, passing them out to starstruck passersby on the street.

The segment ends with the pair pulling into the Bellagio Hotel and Casino for a grand finale of "My Heart Will Go On," each of them dressed as Jack and Rose in an iconic scene from the blockbuster "Titanic."

As she and Corden stand at the bow of a small replica of the Titanic floating in the hotel's sprawling fountain, Dion caps off the performance by dropping a replica Heart of the Ocean blue diamond necklace into the water.

Dion wraps up her Vegas residency in June. It's set to be followed by a world tour that kicks off in Quebec City on Sept. 18.