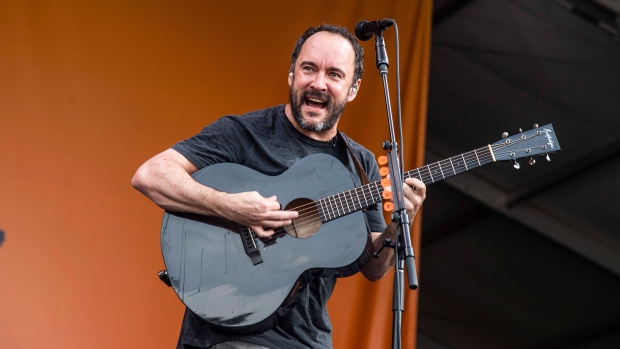 LOS ANGELES - Dave Matthews is having a hard time imagining his band being included on the same Rock & Roll Hall of Fame list as other musical icons such as Whitney Houston.

The Dave Matthews Band frontman said their recent nomination for the Hall's 2020 class was unexpected and a “little bit insane.” He said he feels honoured to be amongst music's elite while promoting his newly-launched board games called Chickapig and 25 Outlaws .

“It's a real honour,” Matthews told The Associated Press on Wednesday. “Even if they stick us in a holding pen for a few years, that's OK. Just to get on that list. I can't believe I'm on a list with Whitney Houston, Motorhead and T. Rex. That's pretty awesome.”

The official inductees will be announced earlier in January.

Matthews called this moment of his life exciting, especially with the release of the board games he created with Brian Calhoun, a longtime friend and business partner. The singer-guitarist said they got into the board game business to create a product to bring families and friends together with the hopes of putting their cellphones down.

“So if the end of times comes, not saying that it's going to happen, but if it does happen and all of our phones die, we can play Chickapig,” Matthews joked. “We won't be completely lost.”

Chickapig is being dubbed a lightly strategic social chess game that features chicken-pig hybrids that attempt to manoeuvr past hay bales and a pooping cow. The game is designed for people aged above 4.

25 Outlaws is based on poker, but with a “Wild West” twist. This game is more suited for younger adults and older players since they are tasked with trying to eliminate rival outlaw gangs.

Both games are currently on sale in major retail stores. Calhoun also has a children's book called “Little Joe Chickapig,” which is seeded from the Chickapig board game.

Calhoun, a popular guitar maker, came up with the Chickapig concept in 2013 after family and friends said they were tired of playing “boring” games. A month later, he invented the board game. It ended up becoming popular through grassroots efforts with the help of Matthews.

“It was probably a year of just our friends and families playing without talking about commercializing,” said Calhoun, who made high-end acoustic guitars for musicians including Matthews, Brandi Carlile, Keith Urban and Jason Mraz. “I mean, he joked it's going to be the next Monopoly. But this game was just this fun thing that brought people together in the early days.”

Much like his guitars, Calhoun custom-made the board game pieces in his Virginia-based guitar shop.

“You don't expect when your friend glues wood together in his basement, rolls over to your house and have invented this game,” said Matthews, who drew the box cover art for 25 Outlaws, which was named by this 12-year-old son at the time.

Matthews believes their board games can thrive in a growing industry.