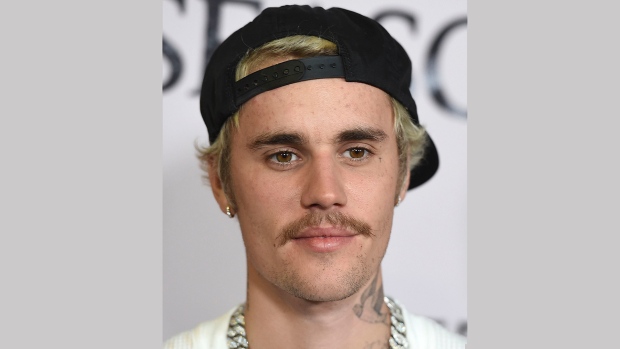 In this Jan. 27, 2020 file photo, Justin Bieber arrives at the Los Angeles premiere of "Justin Bieber: Seasons." The program is featured at The Paley Center for Media's PaleyFest LA. The festival is available on the Paley Center’s YouTube channel. (Photo by Jordan Strauss/Invision/AP, File)

TORONTO - Justin Bieber emerged as the top Canadian nominee at this year's Grammys, but the singer says he's confused over why his latest album “Changes” wasn't acknowledged as an R&B project.

The Stratford, Ont.-raised superstar turned to Instagram on Tuesday with a message that, in part, said he was “flattered” by his four nominations, while he questioned the Recording Academy's decision to box him into pop music categories.

“From the chords to the melodies to the vocal style all the way down to the hip hop drums that were chosen it is undeniably, unmistakably an R&B album!” he wrote.

But his fifth studio release wasn't recognized as such, and while it's unclear who submitted it for nominations, the recording picked up only pop praise, pushing him ahead of multi-faceted Canadian music producer Kaytranada, who trailed closely behind with three nods.

Bieber grabbed a best pop vocal album nod, while his single “Intentions,” with rapper Quavo, was recognized in the pop duo performance category. The hit “Yummy” is competing as best pop solo performance.

Aside from his pop prospects, Bieber found his name under best country duo or group performance for his single “10,000 Hours” with Nashville act Dan + Shay.

Being shut out of the R&B categories is a setback for Bieber, who many critics suggest is trying to shed his image as a teen pop star and mature into a soulful adult vocalist.

His Grammys lead was nearly matched by Kaytranada. The Montreal producer made waves as a contender for best new artist where he'll compete against heavyweights that include Texas rapper Megan Thee Stallion and Los Angeles singer Doja Cat.

Reached at her Toronto art studio Tuesday, Pimienta said the nomination was unexpected.

“I don't really pay attention to awards but it's still, of course, a great honour,” she added.

“I might not care about it that much, but because I love my family, and people who love me care about it so much and they're so proud of me, I have to be happy, you know? And I am so grateful.”

Toronto rap star Drake pulled in three nominations. He has two for “Laugh Now, Cry Later” - best rap song and best melodic rap performance - and another for the music video of “Life is Good,” a track he made with rapper Future.

Producer Frank Dukes, who grew up in Toronto, shares two nods with Post Malone for his work on “Hollywood's Bleeding,” up for album of the year, and the single “Circles,” under record of the year.

Among the biggest upsets was the total absence of Toronto singer the Weeknd from the nominations. His inescapable 2020 album “After Hours” and its No. 1 single “Blinding Lights” were considered front-runners by awards prognosticators.

Late Tuesday, the artist born Abel Tesfaye addressed the snub on Twitter by addressing organizers and their largely secret voting process: “The Grammys remain corrupt. You owe me, my fans and the industry transparency...”

Other Canadians sharing the Grammy spotlight include singer-songwriter Jonathan Saxe, who performs under the name JP Saxe. He locked his first song of the year nomination with co-writer and duet partner Julia Michaels on their sombre “If the World Was Ending.”

Sam Ellis, a native of Cambridge, Ont., marked his own landmark Grammy moment as songwriter on “More Heart Than Mine,” nominated for best country song.

Leonard Cohen landed a fourth career nomination for his posthumous 2019 album “Thanks For the Dance” in the folk album category, while Rufus Wainwright added a second Grammy nod to his illustrious career, this year for “Follow the Rules” under traditional pop vocal album.

Nasri Atweh, best known as the vocalist for reggae-pop fusion act “Magic!”, was among the songwriters nominated for best R&B song with “Slow Down,” performed by Skip Marley and H.E.R.

British Columbia house music producer Jayda G, who started her professional pursuits as a science student in Vancouver, will compete for dance recording with her track “Both of Us.”

“Weird Al” Yankovic's longtime guitarist Jim West said being named in the new age category for the second consecutive year was enough to convince him to scrap plans of spending the day in line at the Los Angeles Department of Motor Vehicles.

Renewing his driver's licence could wait, he decided, since he wanted to savour the moment for his album “More Guitar Stories.”

But West, who grew up in Toronto and Ottawa, wondered how different the Grammys might look compared to last year when fellow nominees could celebrate together.

“One thing I think I'm gonna miss is going to the parties,” he said.

“I don't think anybody's going to be up for anything like that.”

French-Canadian actress Audrey Brisson shares a nomination with the U.K. cast of “Amelie,” a musical based on the 2001 romantic comedy that's recognized in the best musical theater album category.

Several other famed Canadians didn't get nominations themselves but were involved in recognized projects.

A reading by “Jeopardy!” contestant Ken Jennings of the late Alex Trebek's memoir “The Answer Is...Reflections on My Life” is competing for spoken word album, while Ottawa native Alanis Morissette's “Jagged Little Pill” production is up for musical theater album, a prize for the vocalists.

-With files from Cassandra Szklarski.

This report by The Canadian Press was first published November 24, 2020.