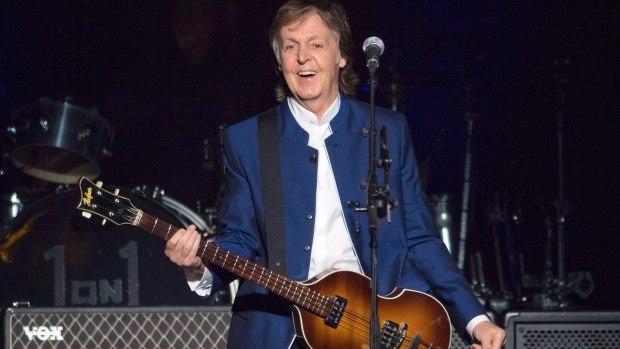 In this Monday, July 10, 2017 file photo, Sir Paul McCartney performs at Amalie Arena in Tampa, Fla. Most hosts would be quite happy to have Paul McCartney come to a shindig. (AP Photo/Scott Audette, file)

A Nova Scotia teen who has drawn global attention for her Mi'kmaq rendition of The Beatles' classic song “Blackbird” can now add Paul McCartney to her growing list of fans.

In concert footage published Sunday on Twitter by the United Nations' human settlements and youth branch, the former Beatle praises Emma Stevens' recording and encourages his fans to look it up online.

“There's an incredible version a Canadian girl has done, you can see it on YouTube. It's in her native language,” McCartney told fans at the unspecified venue.

“It's really cool. Check it out,” he said a moment later.

McCartney is the writer and original performer of “Blackbird,” which first appeared on The Beatles' self-titled 1968 album, known as the White Album. The 76-year-old did not publicly respond to a tweet from UN-Habitat Youth proposing a duet with Stevens when his current tour comes to Vancouver on July 6.

Stevens and her classmates at Allison Bernard Memorial High School in Eskasoni, Cape Breton, recorded the song to highlight the United Nations' International Year of Indigenous Languages, which seeks to raise awareness of threats to Indigenous languages across the world.

As of Monday afternoon, the video had been viewed more than 420,000 times since it was uploaded to YouTube on April 25.

Stevens also spoke and performed last week at a UN-Habitat Assembly in Nairobi, Kenya, where she highlighted the red dress movement, which seeks to highlight the plight of missing and murdered Indigenous girls and women in Canada.

She identified herself as a member of the Eskasoni First Nation before singing the Mi'kmaq Honour Song.