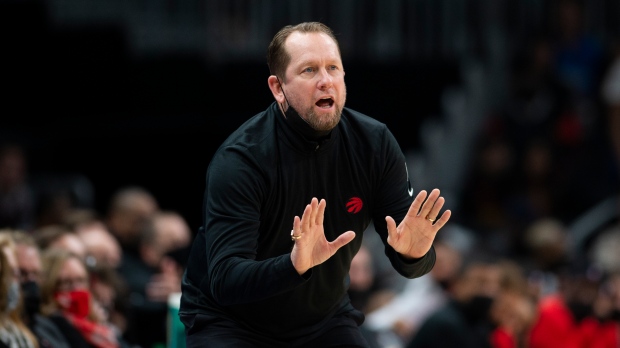 Toronto Raptors head coach Nick Nurse reacts to call during the first half of an NBA basketball game against the Atlanta Hawks Monday, Jan. 31, 2022, in Atlanta. (AP Photo/Hakim Wright Sr.)

It’ll be a few more months before the Raptors are back in action, but Coach Nick nurse is set to hit the stage at TD Toronto JazzFest this weekend.

Nurse, who can usually be seen calling the plays at Raptors Games, is also a huge music fan and aspiring musician and is set to make a guest appearance Sunday with The New Power Generation, Prince’s former backing band.

Nurse is no stranger to Prince’s music. The first song he learned to play on the piano was Purple Rain. In previous interviews he has talked about hitting the road to catch Prince concerts in the 80s and he has even since purchased Prince’s Alpha Grand Purple Piano.

It won’t be the first time that the coach has gotten up on stage either. He previously performed with the Arkells, making a surprise appearance during a packed concert at Budweiser Stage in 2019 after the Raptors won the NBA championship.

“You do NOT want to miss this,” the festival tweeted Tuesday, promoting Nurse’s appearance.

TD Toronto JazzFest is celebrating its 35th year. The festival kicks off June 24 and runs through July 3.

Nurse will be performing with The New Power Generation at the TD Main Stage - The Block at Queen’s Park and Bloor Street June 26 at 8:45 p.m.