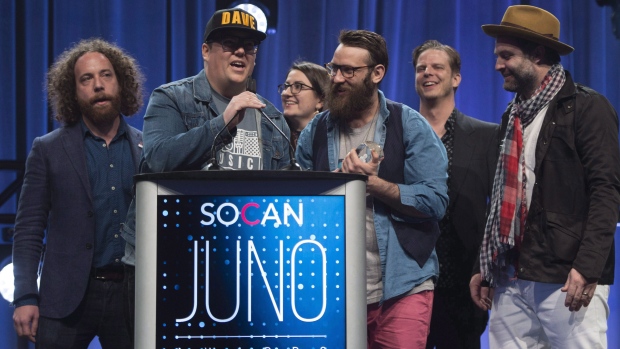 The Strumbellas accept the award for Single of the Year at the Juno Gala awards show in Ottawa, Saturday, April 1, 2017. THE CANADIAN PRESS/Sean Kilpatrick

TORONTO - The Strumbellas say they're postponing a 14-city Canadian tour after one of their members was hospitalized with an illness.

The Toronto-based act's keyboardist David Ritter posted on social media telling fans that one of his bandmates is “undergoing medical treatment.”

He did not provide further details on the circumstances and a representative declined to comment.

The six-member band rose to mainstream popularity nearly four years ago when their pop-folk single “Spirits” became a radio hit across North America and in a number of European countries.

The Strumbellas were planning to promote their latest album “Rattlesnake” with a tour starting in Victoria on Jan. 9, with further stops in Calgary, Edmonton, Winnipeg, and Saskatoon.

They were also set to play five Toronto shows in different venues around their hometown.

“We know people go to a lot of effort to come see us, and we don't take that for granted,” Ritter said in the post.

“As a band, we're working on getting back to full strength and focused on getting out on the road to be with you guys as soon as we can.”

Tickets will be honoured for the rescheduled dates, he added.

This report by The Canadian Press was first published on Jan. 7, 2020.