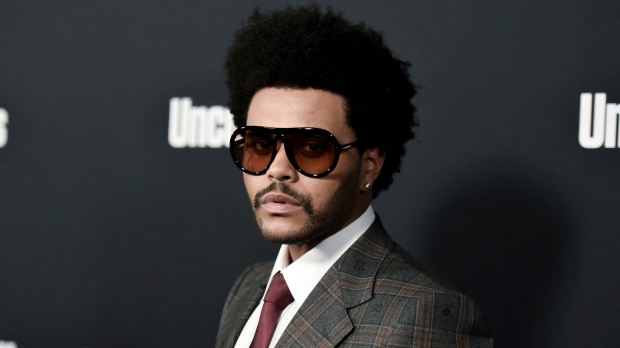 The Weeknd attends the LA premiere of "Uncut Gems" at ArcLight Hollywood on Wednesday, Dec. 11, 2019, in Los Angeles. (Photo by Richard Shotwell/Invision/AP, File)

LOS ANGELES - The Weeknd angrily slammed the Grammy Awards, calling them “corrupt” after the pop star walked away with zero nominations despite having multiple hits this year.

The three-time Grammy winner criticized the Recording Academy on Tuesday after he was severely snubbed despite having one of the year's biggest albums with “After Hours” and being tapped as the Super Bowl halftime headline performer. He also topped the Billboard Hot 100 chart with “Blinding Lights” and “Heartless.”

“The Grammys remain corrupt,” the singer said on Twitter. “You owe me, my fans and the industry transparency.”

The harsh words come less than a year after the Recording Academy's ousted CEO accused the group that determines nominations in the top categories of having conflicts of interest and not engaging in a transparent selection process.

Harvey Mason Jr., the Recording Academy's interim president and CEO, spoke earlier about whether he was surprised the Weeknd didn't earn a single nomination. He said it's hard to predict the voters' decisions.

“You know, there's so many nominations and there's only so many slots, it's really tough to predict what the voters are going to vote for in any given year,” he told The Associated Press. “I try not to be too surprised.”

After the Weeknd called out the academy, Mason Jr. released a statement explaining some that “unfortunately, every year, there are fewer nominations than the number of deserving artists.”

“We understand that The Weeknd is disappointed at not being nominated. I was surprised and can empathize with what he's feeling,” Mason Jr. said.

The Weeknd was shut out from being a Grammy nominee along with Luke Combs, who set records on streaming services and dominated the country charts. Morgan Wallen also had a successful year in country music, but he came away empty.

Justin Bieber earned four nominations, but the singer also criticized the Grammys decision-making as well. He said music from his fifth studio album “Changes” was wrongly viewed as a pop album, rather than an R&B project.

Bieber gave thanks saying he was “flattered” for being acknowledged but thought being left out of the R&B category was a mistake.

The singer said he loves pop music, but he wants to be respected for his work.

“I grew up admiring R&B music and wished to make a project that would embody that sound,” he said. “For this not to be put into that category feels weird, considering from the chords to the melodies to the vocal style, all the way down to the hip-hop drums that were chosen, it is undeniably, unmistakably an R&B album!”

The Grammys remain corrupt. You owe me, my fans and the industry transparency...