Neil Young is boycotting Spotify, but his biggest hits are still available in Canada 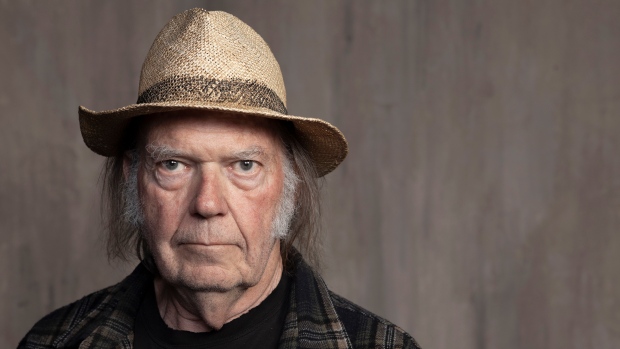 FILE - Neil Young poses for a portrait in Santa Monica, Calif. on Sept. 9, 2019. Spotify says it will grant the veteran rocker's request to remove his music from its streaming platform. (Photo by Rebecca Cabage/Invision/AP, File)

Neil Young severed ties with Spotify this week, but for Canadian listeners many of his classic songs are still streaming on the platform.

“Heart of Gold,” “Harvest Moon,” and “Rockin' in the Free World” are just a few of Young's defining tracks that remain accessible on Spotify Canada days after a massive takedown of his music.

Their presence throws a wrench into Young's passionate boycott of Spotify.

Earlier this week, Young gave the streaming giant an ultimatum saying they must remove his music from the service if they continued to allow podcaster Joe Rogan to spread misinformation about the COVID-19 vaccine on his show “The Joe Rogan Experience.”

Spotify, which has a multi-year distribution agreement with Rogan, granted Young's request on Wednesday and within hours began taking down his albums.

In the United States, that left Young's Spotify profile looking especially bare. Only a selection of collaborations he recorded with other artists were still available, including several from a 1992 live recording of Bob Dylan's 30th anniversary concert.

In Canada, some of Young's work, “Cinnamon Girl,” “Old Man” and the entirety of his new album “Barn,” disappeared, but many other songs included on film soundtracks and compilations did not.

A representative for Spotify did not respond to a request for comment.

Music distribution in the digital era is often clouded by past deals and other licensing agreements that determine who can upload and take down songs in each country.

“Rights in different territories might have different guidelines that have to be followed,” said Colin Mills, a music business professor at Algonquin College in Ottawa.

“It's a little bit more complicated for Neil Young than an artist that's come out in the last five or 10 years where the rights are held by one or two parties. (With) a Neil Young there might be multiple parties involved over the span of his career.”

Young's record label Warner Music Canada declined to comment while his manager did not respond to requests for comment.

Since Monday, when Young first posted about Spotify on his website, shares of the streaming service have lost nearly seven per cent of their value on the New York Stock Exchange.

The 76-year-old musician has been outspoken on various COVID-19 issues over the past two years. He told Howard Stern in a recent interview that he refused to tour any time soon worried that he might be “playing to a bunch of people with no masks on.”

In a statement on his website, he suggested that many of Spotify's listeners are hearing misleading information about COVID through the platform. They're “impressionable and easy to swing to the wrong side of the truth,” he wrote.

“These young people believe Spotify would never present grossly unfactual information,” he said. “They unfortunately are wrong. I knew I had to try to point that out.”

He said he appreciated his record label for standing behind him, since Spotify is responsible for 60 per cent of his music being streamed all over the world. He said it was “a huge loss for my record company to absorb.”

“I sincerely hope that other artists can make a move, but I can't really expect that to happen,” he added.

“I did this because I had no choice in my heart. It is who I am. I am not censoring anyone. I am speaking my own truth.”