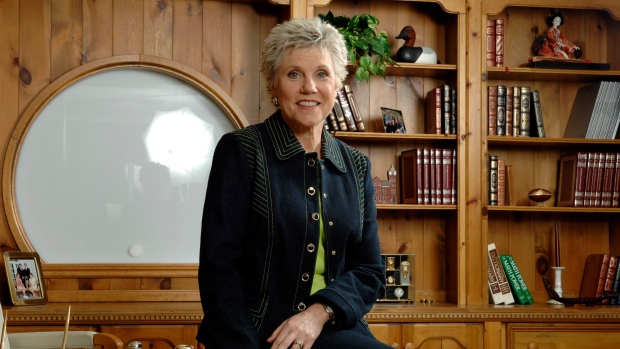 Anne Murray says she won't be among the Canadian snowbirds migrating south this winter.

While the celebrated singer has made a tradition out of packing her suitcase and setting forth to the Florida sun each year, in the midst of the COVID-19 pandemic she's staying put inside her new Halifax home.

“If you have to be isolated, I'm in a great spot,” the 75-year-old said in an interview over her iPad.

“I'm right on the water ... you really are in touch with nature. Lots of birds, changing of the trees and boats. I feel like I've won the lottery.”

After selling her place in Markham, Ont. and moving east last year, Murray is enjoying the rekindling of relationships with her friends and family, while making the briefest of forays back into the music industry, as she did this year with a new Christmas compilation album.

Murray grew up a couple of hours from Halifax, in the mining community of Springhill, N.S., and while there was always an urge to return to her roots, her music career pulled her in another direction. But the calling eventually got the best of her - a feeling she believes other Maritimers who've moved away can probably understand.

“There seems to be a huge magnet down here,” she said.

“I thought about it for a long time ... and it felt like the right thing to do. Now that I've been here for a year and a half, I know it was.”

Leaving the Toronto area was another step in Murray's retreat from the music industry, where she once made history as the first Canadian female solo singer to top the U.S. charts and the first to earn a gold record for her song “Snowbird.”

Four Grammy wins and a record-setting 24 Junos later, Murray famously hung up her microphone a decade ago, swearing off any possibility of a comeback attempt. She's kept her word and insists she hasn't second-guessed the decision for a moment.

Sometimes she looks around at her contemporaries still playing in their later years and wonders what they're thinking.

“They don't sound that great, but they're still doing it,” she said.

“People don't seem to mind. But I was one of those (singers) who couldn't. I have too much trouble settling for less.”

She's often asked to perform live, but she shoots down those requests and says she declines the many advances made by other musicians asking for her to appear on their albums.

Only when her record label Universal Music Canada comes calling does she deliver the occasional compilation.

Her latest, “The Ultimate Christmas Collection,” released earlier this month, repackages 22 songs that made her part of the Christmas zeitgeist.

Accumulated from her six chart-topping holiday albums, the tracks include her original song “Christmas Wishes,” a cover of Elvis favourite “Blue Christmas” and “Baby, It's Cold Outside,” with Michael Buble.

The album took shape during the summer as Murray pulled out her compact discs and dusted off videos of her old Christmas TV specials to remind herself of a period in her life that's mostly a distant memory.

She looks back fondly on those annual Christmas concerts because of the joy that radiated from the audience.

“It was such a happy time,” she said. “People would sing at the top of their lungs and it was just fabulous, like a great big sing-along.”

Her interest in listening to music has faded in recent years, Murray said. While she'll casually sing to herself while doing chores around the house, that's usually the closest she'll get to putting on a show.

But a few months ago, Murray sat down with her old guitar to find out if her lush alto voice could still carry a tune. For the first time in a long time she revisited a few old songs, she said, just for the fun of it.

“It does go if you don't use it, but it's still there,” she said. “And if I gave it some time, in a few weeks I could probably be singing.”