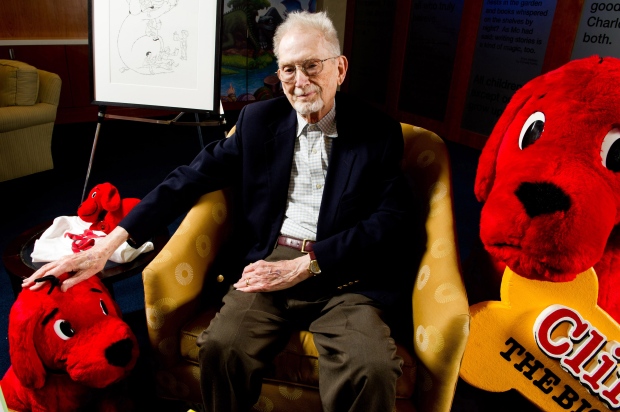 In this May 4, 2011 file photo, author and cartoonist Norman Bridwell poses for a portrait at Scholastic headquarters in New York. (AP Photo/Charles Sykes)

Norman Bridwell, a soft-spoken illustrator whose impromptu story about a girl and her puppy marked the unlikely birth of the supersized franchise Clifford the Big Red Dog, has died at 86.

Bridwell, who lived for decades in a house with a bright red door on Martha's Vineyard off Cape Cod in Massachusetts, died Friday at Martha's Vineyard Hospital, where he had been for about three weeks after a fall at home in Edgartown, his wife, Norma, said.

He suffered from several ailments, including a recurrence of prostate cancer, she said. He passed peacefully with family members at his bedside, she said.

Starting in 1963 with "Clifford, the Big Red Dog," Bridwell wrote and illustrated more than 40 Clifford books, from "Clifford and the Grouchy Neighbors" to "Clifford Goes to Hollywood." More than 120 million copies have sold worldwide, along with cartoons, a feature film, a musical, stuffed animals, key chains, posters and stickers. Images of Clifford have appeared everywhere from museums to the White House.

"A lot of people were Clifford fans and that makes them Norman fans, too," said his wife of 56 years.

Clifford became standard nighttime reading for countless families and a money machine for publisher Scholastic Inc. Spinoffs include cartoons with John Ritter as the voice of Clifford and future "Hunger Games" novelist Suzanne Collins among the script writers.

Scholastic, which became a top children's publisher thanks in part to Clifford, installed bright red cushions on the chairs in the corporate headquarters' auditorium in New York. Scholastic had been in business for decades before Clifford, but the series' success inspired the publisher to look for other stories with brand appeal, including "Goosebumps," "The Magic School Bus" and "I Spy."

Bridwell had completed two more Clifford books to be released next year, Scholastic said in a statement.

In his pre-Clifford life, Bridwell was a filmstrip and slide illustrator, trying to break into children's publishing to support his family. His work had been rejected all over New York when an editor at Harper & Row (now HarperCollins) suggested he try writing a story to go with a picture he had submitted of a child and her horse-sized dog. Bridwell's idea: Thanks to the girl's affection, a puppy --the runt of the litter -- grows into a klutzy but good-hearted behemoth, as big as the lighthouses on the author's imaginary "Birdwell Island." A nearby paint container inspired Bridwell to colour Clifford fire engine red.

Bridwell had sketched a bloodhound because he wanted one while growing up and he named the girl Emily Elizabeth, after his daughter. He planned to call the dog "Tiny," but his wife, Norma, suggested "Clifford," the name of an imaginary friend she had as a child. Bridwell spent a weekend working up a story. Several publishers turned the book down before editor Beatrice de Regniers of Scholastic's "Lucky Book Club" saw Clifford's potential.

"I said to my wife, 'Now don't count on there being any more. This one is just a fluke. I don't know if there will ever be another one,"' Bridwell told The Associated Press in 2012.

Bridwell achieved mainstream success without mainstream distribution. Scholastic offered the first Clifford story through book clubs and school fairs (Clifford wasn't available in stores until the 1980s) and it sold well enough that Scholastic published a second, non-Clifford book by Bridwell, "The Witch Next Door." Over the years, Bridwell added such "Clifford" sidekicks as the purple poodle Cleo, the three-legged training dog KC and Emily Elizabeth's cranky schoolmate, Jetta. Bridwell's name was a ringer for Norman Rockwell's and Birdwell's books were also a comforting portrait of stability and innocence. But he did work in social commentary, such as including children of different racial and ethnic backgrounds.

"I visited a school in Washington state and some kid said, 'Why do you have these black people in the book?"' Bridwell told The Associated Press in a 2011 interview. "I said that we wanted to have a little mix of races and nationalities and not just a purely lily white town."

Bridwell said he came up with ideas for Clifford by watching other dogs. Clifford would often get himself in trouble, scattering garbage on the lawn or crushing a fence, then redeem himself as only a big dog could, whether saving a drowning child or gently gripping a stranded car between his teeth and carrying it to the nearest garage. Bridwell believed Clifford's imperfections were part of his appeal, making kids more forgiving of their own mistakes. While he denied that Clifford was based on himself, Norma Bridwell disagreed.

"He's never been able to recognize that," she told the AP. "Clifford tries to do the right thing, Norman tries to do right the thing, and he makes a mess of it. But he's the most lovable grown-up man. He's just a nice guy."

"I'm not really all that nice," the author responded, "but I try to be."

Bridwell was born in Kokomo, Indiana, in 1928. He was not a star in art or writing classes, but his mechanical skills were so much worse that a high school shop teacher suggested he stick to drawing. After graduation, he attended the John Herron Art Institute in Indianapolis, then moved to New York and studied at Cooper Union. Bridwell spent much of the 1950s as a commercial artist.

In addition to his wife and daughter, Bridwell is survived by a son, Timothy, and three grandchildren. The family planned a private service with a public celebration of his life and work to come later, likely over the summer, his wife said.