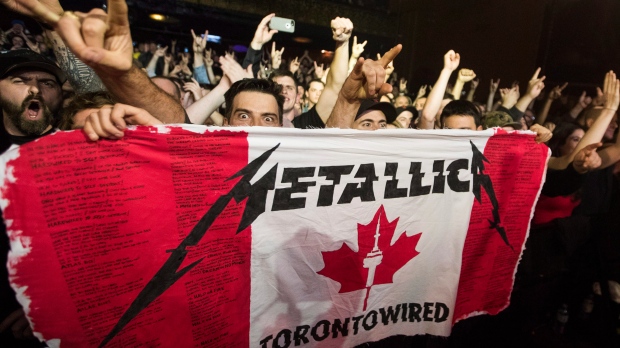 Fans cheer as Metallica plays at the Opera House, a small venue with a 950 person capacity, in Toronto, Tuesday November 29, 2016. THE CANADIAN PRESS/Mark Blinch

TORONTO - Ontario's live music venues can get concertgoers back onto their feet after a sudden change in the province's COVID-19 guidelines.

As part of a broader decision to remove capacity limits at outdoor, organized public events, a representative for the provincial government confirmed Thursday that indoor concert venues will no longer be subject to seated restrictions.

The Canadian Live Music Association adds that the easing of rules means venues that hold “general admission” shows - or concerts that are largely standing room only - can return to something closer to business as usual about two weeks earlier than planned.

However, the association's chief executive Erin Benjamin notes concertgoers will still be required to show proof of vaccination and wear masks inside the venue.

The latest change comes after some live venues opted to install temporary seating earlier this month so they could move forward with planned concerts under rules that required all concerts to be seated.

But changes to the guidelines were already in the works - concert venues were originally lumped in with a loosening of restrictions on nightclubs, strip clubs, bathhouses and sex clubs that goes into effect Nov. 15.