Ontario's film ratings board to be shuttered by Ford government 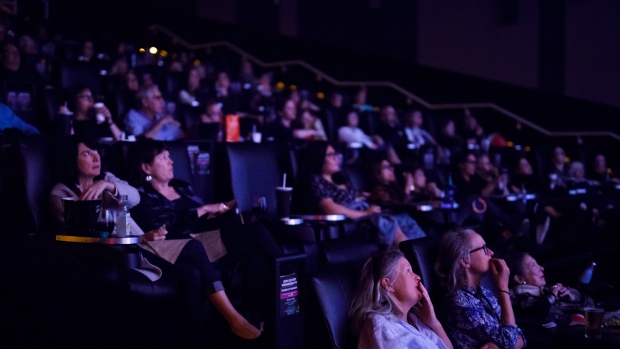 Attendees keep their eyes on the screen in a Toronto theatre as they watch stream of Margaret Atwood speaking about her new book "The Testaments" in London, England, Tuesday, Sept. 10, 2019. THE CANADIAN PRESS/Cole Burston

TORONTO - The Ontario government is shutting down the agency that oversees the province's motion picture ratings system.

In an announcement Friday, the ministry of government and consumer services says winding down the Ontario Film Authority on Tuesday will save money for the film industry, which pays classification and licensing fees before each film is approved for screening in the province.

The closure of the arm's-length agency is a first step in a consultation process Doug Ford's Progressive Conservative government plans to launch in the new year. It expects to consult with provincial film ratings agencies, the federal government and audiences to create “a modern framework for film classification.”

Until the process begins, the Ford government says it will rely on British Columbia's Motion Picture Act to classify films released in Ontario. The government projects a savings of $1.5 million to $2 million per year for the film industry.

A representative for Consumer Protection B.C., which oversees the province's film ratings, said in an email that “efforts are being made to develop a formal agreement with Ontario as soon as possible.”

The move comes amid years of changes to how the province ratings system is organized.

The Ontario Film Authority was created under the Liberals in 2015 as part of a restructuring of the former Ontario Film Review Board. Both operated under a mandate to help the film industry, rather than financially benefit from the ratings system.

Former Liberal consumer services minister David Orazietti said in a 2015 interview with The Canadian Press that he hoped to speak with other provinces about creating a national movie ratings system. He said a cross-country board would establish greater consistency and better co-ordination of standards in all Canadian communities.

For decades, regional ratings boards were considered an effective way to classify movies for Canadians because it allowed parts of the country to more accurately represent their local standards. They could also effectively ban a film they deemed unacceptable.

However, in more recent years some of those film ratings boards have come to rely on standards from outside their own province or territory.

Currently, Quebec has its own ratings system while most other provinces use a movie's rating from B.C. or the United States, where the classification process is voluntary.

It's created some stark differences in Canadian ratings between the regions.

When “The Hunger Games” hit theatres, for example, it was classified differently across the ratings boards, getting an all-ages G in Quebec, a 14A in Ontario - meaning kids 14 and under must be accompanied by an adult - and a PG-13 in the U.S.

More recently, “Deadpool” received a 14A rating in B.C., Alberta, and Saskatchewan, while it had a stricter 18A rating in Manitoba and Ontario, where anyone under 18 required adult accompaniment.

This Canadian Press first published this story on Sept. 27, 2019.