KENSINGTON, P.E.I. -- A Prince Edward Island police department is threatening to impose the Nickelback treatment on anyone who drinks and drives.

The Kensington Police Service shared a social media post over the weekend promising to force any drunk drivers it arrests to listen to the Alberta band while in the back seat of a cruiser.

"We figure if you are foolish enough to get behind the wheel after drinking, then a little Chad Kroeger and the boys is the perfect gift for you," Const. Robb Hartlen says on Facebook, alongside a photo of the band's breakthrough album, Silver Side Up, in what appears to be cassette form.

"So please, let's not ruin a perfectly good unopened copy of Nickelback. You don't drink and drive and we won't make you listen to it."

The post created two kinds of controversy among commenters: Those offended the police service was making a joke about drunk driving, and Nickelback fans annoyed the band was the butt of the joke.

The force said the jokes were being made in service of something it takes very seriously, and also insisted: "We actually like them too ... We are just having a little bit of fun."

The band has been a huge commercial success, with multiple Juno wins, but is also gleefully maligned by some detractors.

It has been the subject of spiteful petitions and protests; a Chicago mayor was once pressured into clarifying he wasn't a fan.

Kroeger told The Canadian Press in a 2014 interview that the critics have actually done the band a favour by heightening the public discussion about the group. 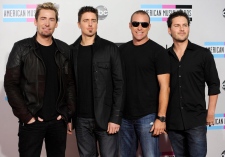