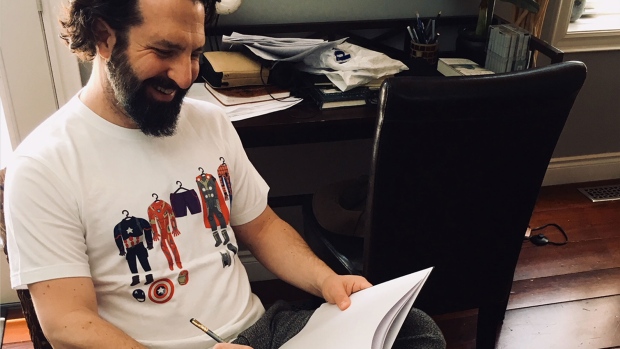 Artist Ramón Pérez at work in his Toronto studio. (Submitted)

Toronto-based artist Ramón Pérez, 45, is an award-winning cartoonist, illustrator and designer, as well as the CEO of RAID, a local creative agency and comic arts studio.

He’s inked Wolverine, Captain America, Deadpool, and Betty and Veronica to name a few. He’s also the author of an award-winning graphic novel, “Tale of Sand” based on a screenplay by the late Jim Henson.

Ahead of his appearance as a special guest at Fan Expo this year, Pérez took some time to chat with CP24.com about how he managed to carve out a successful cartooning career in the GTA.

Note: Some answers have been edited for brevity

Is it cartoonist or artist?

I usually go by cartoonist or just artist to be honest with you. I tend to jump around. I’ve been referred to as a cartoonist, which I like, but artist is a more general encompassing term.

It became almost an inadvertent path. I went to arts school at Sheridan College up in Oakville for illustration.

I knew I wanted to do something with art, I just didn’t know what. I came across this illustration program. I looked at it and had an interview and thought “This is awesome!”

I’d always collected comics or read comic strips from the Sunday funnies in the newspaper. I’d draw comic strips, but never really considered it as a career option.

It wasn’t until the illustration program that I met other fellow artists, some of whom had studied in New York at the Kubert School of Art. They were like “Yeah you should do this as a living” and I was like “What?”

I just thought maybe I’d go out and do illustration for magazines.

Both my parents are very blue collar – my mother was a lab technician in a hospital and my dad was a mechanic. So from the European cultures of yesteryear, the artist was not the one who made the money and supported the family, he was a poor guy maybe juggling for a couple of extra dollars.

I met these other artists and they introduced me to this idea that I could do this for a living.

Are you from the GTA?

I grew up in Oshawa just east of the city.

How did you catch your break in the industry?

I’d always do some comic book stuff on the side. I’d always get compliments on the portfolio, but they’d be like “Agh we have no work now.”

Science fiction stuff supported me for a good decade – I became quite a name in that arena.

It wasn’t until 2011 when I had the book called “Tale of Sand” published where I adapted a Jim Henson screenplay from the late 60s, early 70s.

I’d done some comic book work before then – a few short miniseries and a one-off Captain America and an issue of Deadpool.

What does it mean when you say you illustrate an issue – does it mean you draw the whole thing cover-to-cover?

Yeah – pretty much. I did not do the colouring on the book, because it’s kind of separated. Usually you have a pencil and an inker, a colourist and a letterer and they put the book together kind of like an assembly line.

A lot more artists now are doing their own inking on books because people are working digitally now and it’s easier to do that.

With the publication of “Tale of Sand,” that kind of got me a few Eisner Awards, which is kind of like the Oscars of the industry and suddenly everybody was like ‘hey come work for us.’ All these people I’d been trying to get work from were suddenly like ‘hey, who’s this guy? Where’d he come from?’ and I was like ‘I’ve been here all the time!’

Then that kind of pushed me into another tangent of my career where I’d be working a lot for Marvel on a lot of the superhero books and that sort of thing.

So “Tale of Sand” had never been made into a film?

He (Jim Henson) had written this screenplay – I think it was in the mid to late 60s or early 70s. This was before he had done anything related to The Muppets.  There was no Sesame Street. That hadn’t quite taken off yet, so he was still doing a lot of like weird, indie kind of film work. He had a famous one called “Time piece.” It was like a five or eight minute short that garnered him some attention. He had that and a short film called “The Cube” which aired on television.

He was still trying to find his voice, I guess.

The screenplay itself was reminiscent of films like Pink Floyd’s “The Wall” or Monkey’s “Head,” just that weird style of film that was coming out around that era, these stream-of-consciousness, but wacky political commentaries.

Then the company Archaia, who is now owned by Boom!, at the time they had worked up a deal with the Henson Company to go through all the old archives and see what they could take and publish it into a book.

They shopped around for an artist for it and I was one of many they approached. It came down to a bunch of us auditioning and doing some sample pieces.

I did a one-page interpretation of a short scene and I won the attention of both the company and The Henson Company as well – his daughter Lisa Henson runs the company now. She had to have final say on the artist as well. They both kind of agreed on then it was just “alright now here’s this weird script- let’s go adapt this now!”

It was very interesting and exciting and very fast. The turnaround for the project was ridiculous. Rightfully it should have been double the amount of time to produce such a lengthy work.

How long did you have?

I think I ended up doing it in about five or six months. It should have been a year basically for the amount of pages and art and the adaptation process.

How long was it in the end?

I watched all these things and kind of immersed myself in his headspace and found a sense of where he was coming from at the time as a creative individual.

I felt like he was, at the time, an individual who was trying to find his voice or on the cusp of finding his voice perhaps.

He was fresh out of the college arts scene and playing around with some animation, some puppetry, some live action, really just trying to find stories he wanted to tell. I was in a similar position in my career. I think I latched onto that and that’s kind of the story I imbued in my adaptation of the script.

Because it’s such a weird script – It’s kind of like a lucid dream – I didn’t even really think, I just went on instinct. I adapted, cut, rearranged.

Did you feel like you were kind of in his head?

A little bit, yeah, it was weird. My editor at the time would call me up and be like “I get it, yeah – I see where you’re coming from.”

When the book was coming out I remember the editor was saying “Yeah, this is the biggest investment this company has ever made. We’re really standing by it.” I was kind of like “What did I just do?”

It kind of hit me like “What if I totally bombed on this thing. What if what I did was wrong?” Because I didn’t really have time to think about my choices; I just went on instinct and it felt right, but when you stop to think it’s like “Hold on, were these wise choices I made?”

But it ended up working out in the end. The book was critically acclaimed and had some accolades placed in it, which was awesome. It really catapulted my career in the comic book industry.

Have you stayed in Toronto through your career?

I call Toronto my home. I love it here. A few of my L.A. clients have tried to sway me over to L.A. But I don’t mind winter so much and I like the vibe here. It’s just a nice, chill city.

In general if you’re in this industry, is this a good city to be in?

Yeah, actually if you want to stay on the north side of the border, it is probably one of the largest hubs of comic book artists in Canada. There’s a smattering of artists out west and there’s a bit of a scene, a very small one, in Montreal. But Toronto has a huge collective of artists here, which is impressive.

And then we also have the nation’s largest pop culture event, the Fan Expo.

Is it true that you own a life-sized Boba Fett?

Yes. Haha. That was due to a client back in my early gaming days who had to unfortunately sell off a lot of content from their offices due to some financial difficulties. They felt bad. They owed me some money, so they were like “You want Boba Fett?” and I was like “Sure! When am I ever going to buy this for myself? Never. So why not.”

It was a little comic that was supposed to go into NOW magazine at one point, kind of like a Sunday funnies comic insert. I was contacted to do some content and I came up with the idea with a buddy of mine kind of encapsulating our lives in Toronto as two people from the suburbs moving to the big city and the comedy that ensued. It ran for five or six years.

It got some accolades and some good fan following and that helped connect me with the Toronto comic community.

Was it weird to turn the pencil on yourself?

No. It was always a thing I did growing up. I don’t know if it’s because I tended to move around a lot so my art was a connector when I met people. I would kind of draw doodles of the people and friends I would meet, kind of create stories or scenes or pictures. So it was a natural extension of something I did earlier and I was constantly using myself as a kind of foil in these things.

What do you love about coming to Fan Expo?

I’m part of RAID Studio here in Toronto. It’s a collective of comic book artists and we also do other sorts of art as well. It’s kind of like that on a grand scale – I’m getting to connect with people that I don’t see every day, the artists form around the world who I’ve met at other shows.

The internet has definitely changed the dynamic over the past decade where before the shows were the only way you could connect with your fan base.

But there’s still something interesting about meeting and connecting in person and seeing people’s reaction to your art and your books.

Any advice for anyone looking to get into the industry?

I think the biggest thing I learned over my years is that it’s a very social industry. People like to work with who they like. Talent does go far, but actually being an awesome person to work with and collaborate with (helps).

In this kind of an industry, people get to choose who they like to work with. So just go to these shows, socialize, meet editors.

Some of my earliest opportunities came from just going to these shows and meeting other artists and writers and getting on their radar.

People are people – they like to step away from ‘what’s your favourite character’ discussions and just talk about life in general.