Quebec designer and partner say they were victims of homophobic attack 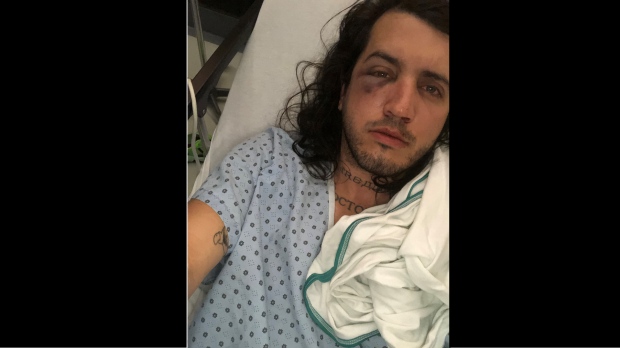 MONTREAL - A Quebec fashion designer said Sunday that an alleged violent attack against him and his partner over the weekend are proof that homophobia remains a problem in Canada.

Markantoine Lynch-Boisvert said he and partner Alex James Taboureau were leaving a bar in La Malbaie, in the province's Charlevoix region late Friday night when a man began directing homophobic insults their way.

He said they were confronted by the man outside the bar, who allegedly headbutted Lynch-Boisvert in the face while two others attacked his partner. They claim the three men attacked again a few minutes later, knocking Lynch-Boisvert to the ground.

“They were kicking me in the face, I was on the ground, and at one moment one of the two said to their friend, 'Stop, you're going to kill him,”' Lynch-Boisvert recalled in a phone interview.

Lynch-Boisvert said he and his partner were eventually able to escape and jump into a taxi. The attack left him covered in blood and vomiting from the head injury, he said, and they quickly called an ambulance.

“I was dizzy, I couldn't see anything, there was blood everywhere,” he said.

Quebec provincial police confirm they responded to a call in La Malbaie Friday night in which two men were taken to hospital. Police spokesman Stephane Tremblay said they received an official complaint from the victims on Saturday and were investigating, but did not provide further details.

Taboureau, for his part, said the entire incident left him in shock.

A number of public figures and human rights groups denounced the incident, which Premier Francois Legault described on Twitter as “an unacceptable and revolting act that has no place in Quebec.”

Conservative Leader Andrew Scheer also spoke out against what he called a “heinous act of hatred.”

“Nobody should ever be the target of violence for their sexual orientation, beliefs and opinions,” he wrote on his Twitter account.

Lynch-Boisvert said his injuries include three facial fractures, while Taboureau is recovering from bruising and a minor concussion.

The designer said he's been inundated with messages of support, but also stories from other LGBTQ people who say they've had similar experiences.

The men, who have been together seven years, said they've decided to speak out about what happened in the hopes of starting a wider conversation about homophobia and how to stop it.

“If something positive has to come out of this, let's try and be sensitive to get people to be more open about the fact that homosexual aggressions are still happening here in Quebec,” Taboureau said.