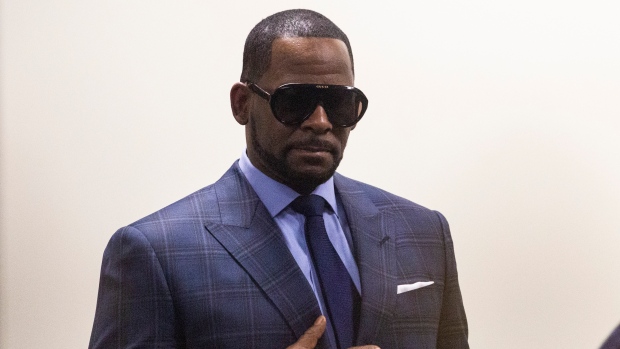 FILE - Musician R. Kelly arrives at the Daley Center for a hearing, Wednesday, March 6, 2019, in Chicago. The lawyer for R. Kelly says the R&B singer, who is awaiting trial on child pornography and other charges, was assaulted by a fellow detainee at the Metropolitan Correctional Center in Chicago. (Ashlee Rezin/Chicago Sun-Times via AP, file)

“This is nothing more than a veiled effort to pile on to further shape the public's perception in this case, ignoring that Mr. Kelly is presumed innocent until proven otherwise,” Kelly lawyer Nicole Blank Becker said by email, adding that his attorneys would “vigorously oppose” the government's request.

“As the trial nears we are looking forward to the truth prevailing,” she wrote.

He's charged with leading what prosecutors call a criminal enterprise of managers, bodyguards and other employees. Prosecutors say the staffers helped Kelly to recruit women and girls for sex and pornography and to exercise a lot of control over them.

Prosecutors now also want jurors to hear about more than a dozen other people who allege Kelly sexually or physically abused, threatened or otherwise mistreated them. The claims include an allegation that he had sexual contact with an underage boy.

Kelly denies ever abusing anyone.

The multiplatinum-selling singer, born Robert Sylvester Kelly, is known for work including the 1996 hit “I Believe I Can Fly” and the cult classic “Trapped in the Closet,” a multi-part tale of sexual betrayal and intrigue.

He also faces sex-related charges in Illinois and Minnesota and has pleaded not guilty.