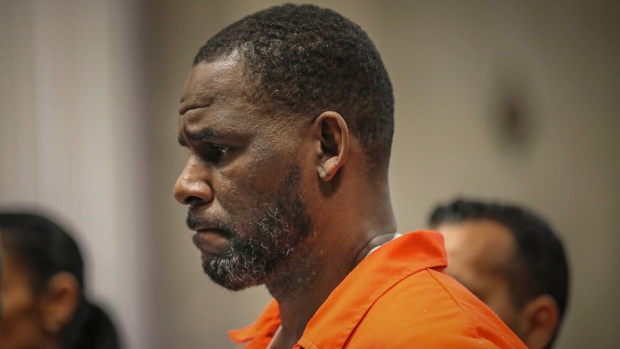 FILE - In this Sept. 17, 2019, file photo, R. Kelly appears during a hearing at the Leighton Criminal Courthouse in Chicago. U.S. District Judge Ann Donnelly signaled on Thursday, June 17, 2021, that the jailed R&B singer will likely get to keep his new defense team for his sex-trafficking trial, despite questions about his attorney's communications with one of Kelly's ex-girlfriends. (Antonio Perez/Chicago Tribune via AP, Pool, File)

NEW YORK (AP) - Jailed R&B singer R. Kelly will likely get to keep a new lawyer in his federal sex-trafficking case despite questions about the attorney's texts and other communications with one of Kelly's ex-girlfriends.

Kelly, 54, is accused of leading an enterprise made up of his managers, bodyguards and other employees who helped him recruit women and girls for sex. Federal prosecutors say the group selected victims at concerts and other venues and arranged for them to travel to see Kelly.

The Grammy Award-winning singer denies ever abusing anyone.

The hearing on Thursday centered on a potential conflict of interest created by lawyer Nicole Blank Becker if she ever gave legal advice to Azriel Clary, Kelly's former girlfriend who is referred to as Jane Doe #5 in the indictment against him.

Clary once lived with Kelly and another woman, Jocelyn Savage, and was a vocal supporter. After their breakup, she agreed to cooperate with the government and is expected to testify at the trial.

Becker told U.S. District Judge Ann Donnelly she had made it clear to both Clary and Savage, “I am Mr. Kelly's lawyer, not theirs.” Prosecutors also said they were not seeking Becker's disqualification, but Kelly still must directly tell the judge he wants her on board.

On her website, Becker describes herself as a former prosecutor in Michigan who is a “powerhouse” at defending people accused of sex crimes.

Donnelly said she still wanted to question Kelly in person before letting him go forward with his new legal team at a trial scheduled to begin in early August.

To make that happen, Kelly's transfer to New York should “happen well in advance of the trial,” the judge said. “It's just much better for him to be here.”

Kelly appeared via video feed from a Chicago lockup dressed in an orange jumpsuit. He could be seen furrowing his brow and pressing his headphones to his ears with both hands in an apparent attempt to better hear the proceeding.

Kelly also faces numerous sex-related charges in Illinois and Minnesota and is scheduled to stand trial in September in Chicago federal court.