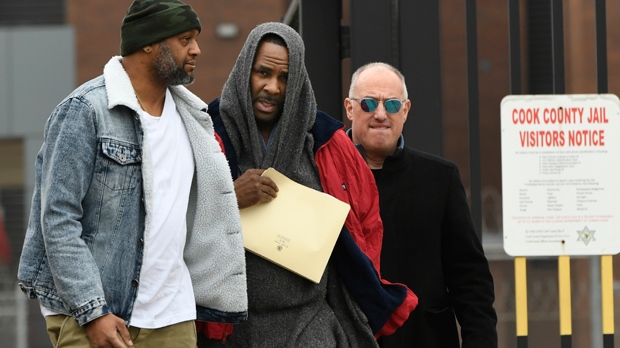 In this March 9, 2019 photo, singer R. Kelly center, walks with his attorney Steve Greenberg right, and an unidentified man left, who gave him a ride after being released from Cook County Jail, March 9, 2019, in Chicago. A Chicago judge is expected to rule on whether to let R. Kelly to travel overseas to perform several concerts to help the cash-strapped singer pay legal and other bills as he faces sex-abuse charges. A hearing Friday, March 22, follows a defense motion saying the 52-year-old singer hopes to do up to five April concerts in Dubai. (AP Photo/Paul Beaty, File)

While the day lawyers deliver opening statements to jurors inside a Cook County courtroom is still many months or even years away, court filings and comments by his lead attorney after the R&B star was charged in February provide clues about an emerging legal strategy.

Based on comments by Kelly and his attorney, they intend to question the veracity of his accusers and argue that, if he had sex with them, it was consensual and he thought they were of age. His attorney has also signalled he may push to have some counts tossed on grounds statutes of limitation ran out or because some are too closely related to crimes for which Kelly was acquitted at his 2008 child pornography trial.

Kelly, 52, was right in more ways than one when he cursed during the interview with Gayle King of “CBS This Morning,” saying: “I'm fighting for my ... life.” If convicted on all ten counts of aggravated sexual abuse of three underage girls and one adult, the Grammy winner faces an effective life sentence of up to 70 years in prison.

The process of vetting evidence from prosecutors hasn't begun, and after wading through it all, the defence is expected to fine tune their argument that Kelly's accusers are misrepresenting the facts. For now, there's not much finesse.

“All of them are lying,” Kelly told King in his only full interview since being charged. “I have been assassinated,” he said. Kelly's lead attorney, Steve Greenberg, also told reporters the day of Kelly's arrest, “I think all the women are lying, yes.”

Greenberg is best known for representing the accused in several high-profile murder cases, including of former suburban Chicago police officer Drew Peterson. He was convicted in 2012 of killing his third wife in a case reopened after his fourth wife disappeared.

Greenberg is regarded as a savvy lawyer prone to quips that sometimes raise eyebrows. In arguing that any sex was consensual, Greenberg told reporters last month about Kelly: “He's a rock star. He doesn't need to have nonconsensual sex.”

Prosecutors say they won't have to depend on the word of the accusers.

The video Avenatti turned over purportedly shows Kelly having sex with an underage girl 20 years ago while Kelly and the girl say aloud more than 10 times that she's 14, which could prove he knew she was under aged.

And another accuser, a hairdresser, says Kelly forced her to perform oral sex on him in 2003 when she was 24. Prosecutors say a police lab found Kelly's DNA in semen on a shirt she was wearing that day.

In a defence filing Wednesday, Greenberg questioned the motives of Cook County State's Attorney Kim Foxx, accusing her of bringing a flimsy criminal case based on old allegations “to thrust herself into the spotlight” of the #MeToo movement, which aims to highlight sexual abuse against women.

Greenberg has also criticized Foxx for public statements in January calling allegations against Kelly in a Lifetime documentary “sickening.” He said characterizing the allegations before charges were even brought illustrated bias and may have tainted the pool of potential jurors, rendering a fair trial impossible. He could revive those arguments in motions to dismiss or in appeals if Kelly is convicted.

The contention that Kelly never knowingly had sex with a minor will rely on Kelly's own believability.

The girl in the video is the same girl in a similar video at the heart of the 2008 trial, Avenatti said. Greenberg said that means charges related to her are a violation of constitutional prohibitions against trying someone for the same crime for which they've been acquitted.

But legal experts say it's not that simple.

Double jeopardy doesn't apply if it's not the same incident being charged, explained Monu Bedi, a professor at DePaul University College of Law. He said it also doesn't apply if it's the same incident but a different charge. All the 14 counts Kelly faced in 2008 were child pornography, while all 10 this time are sexual abuse, so double jeopardy doesn't come into play, Bedi said.

Greenberg has said the legal window on bringing at least some of the charges filed against Kelly shut years ago, though he hasn't fully explained how. Calculating when statutes of limitations run out can be complex, relying on variables that can be open to interpretation.

Illinois legislators in 2017 did erase all time limits for charging sexual assault of children and it unambiguously applies to such crimes that happened anytime since 2017. It can't apply retroactively to older crimes.

But that doesn't mean any sex abuse by Kelly in the late 1990s can't be charged now, Bedi said. That's because older sexual assaults are governed by the statute of limitations as it existed before 2017, when prosecutors had 20 years to charge abuse of children. So, if Kelly sexually abused a minor as far back as the late 1990s, prosecutors should still be within the 20-year charging window.