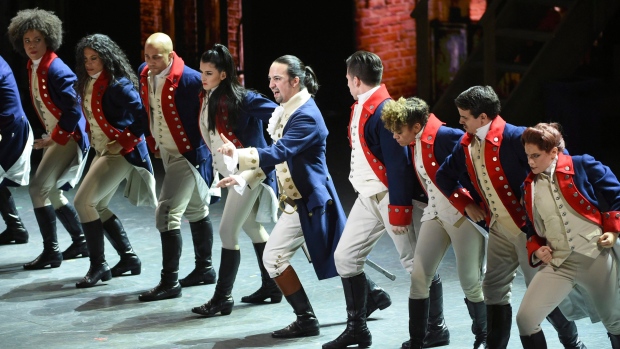 FILE - In this June 12, 2016 file photo, Lin-Manuel Miranda, center, and the cast of "Hamilton" perform at the Tony Awards in New York. Tickets for the Canadian premiere of smash musical "Hamilton" will go on sale on Oct. 28. THE CANADIAN PRESS/Evan Agostini/Invision/AP, File

TORONTO -- Mirvish Productions is warning customers to steer clear of online resellers hawking seats to the Toronto production of "Hamilton" before tickets even go on sale.

The Toronto theatre company revealed Tuesday that the box office for the smash musical will open on Oct. 28.

Shortly after the announcement, an online reseller was touting tickets to the show for as much as seven times their face value, Mirvish said in a news release Wednesday.

The company pointed to Toronto-Theatre.com, which says all tickets are "100% guaranteed" but notes that prices are set by third-party sellers and may be above face value. Attempts to reach the London, England-based reseller were unsuccessful.

Mirvish's director of sales and marketing said he'd be "very surprised" if any of the "Hamilton" tickets being offered online were real.

John Karastamatis said some Mirvish subscribers have bought tickets in advance of the public sale, but none have been issued, and seats haven't been assigned.

Every day, he said, people show up at Mirvish theatres expecting to take in a show, only to find out their tickets are "fraudulent."

But Karastamatis said the theatre company has never seen resellers make a push this early or at such inflated prices.

"They're just taking advantage of people's excitement about the show," he said. "We have no means of knowing that those seats exist or will ever be valid."

Mirvish says it can't guarantee that tickets purchased through third-party brokers are genuine, encouraging theatre-goers to buy seats on its website or at the box office.

"We don't want people spending thousands of dollars on tickets," said Karastamatis. "That ruins the ecology of the entire theatre business."

Earlier this year, the Ontario government scrapped part of a law that would have capped ticket resale prices at 50 per cent above the original face value.

This report by The Canadian Press was first published on Oct. 9, 2019.