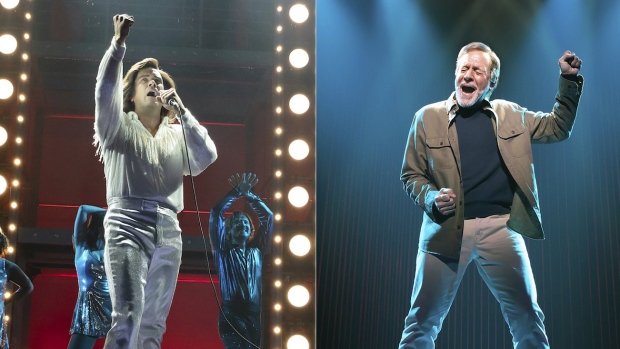 This combination of photos released by O&M/DKC shows Will Swenson as a young Neil Diamond, left, and Mark Jacoby as an older Neil Diamond during separate scenes from the musical “A Beautiful Noise." (Julieta Cervantes/O&M/DKC via AP)

NEW YORK (AP) — There are some interesting cocktails on offer at "The Neil Diamond Musical: A Beautiful Noise” on Broadway and it might not be such a bad idea to order a Sweet Clementine or a Cracklin' Rosé before you get to your seat. Just something to help lubricate one of the most puzzling jukebox musicals in years.

The show that opened Sunday at the Broadhurst Theatre is quite a depressing trip through Diamond's life, offering a respectful and, yes, fully authorized portrait that's unnecessarily boastful — “40 top 40 hits;120 million albums sold,” we're told — as well as positively cringey.

The conceit is that an older Diamond is reluctantly undergoing therapy to figure out why he's such a sad sack. (“This is officially torture,” he snarls — not the best way to start a musical.) A Diamond lyric songbook that his psychologist offers provides a trip back in time to key moments in his life, like “Sweet Caroline,” “Song Sung Blue,” “America” and “Cracklin’ Rosie.”

That's when an amazing Will Swenson as a young Diamond digs deep into his throat to provide a portrait of a tortured artist as a young man, dripping in lamé and spangles. Swenson is insanely great in every number, elevating superficial material to high heights and even playing a mean guitar. "How we doing tonight, Broadway?" he asks. We're eating out of your hand, sir.

But here's the first problem: The older Diamond (Mark Jacoby) STAYS onstage in a leather chair, looking glum over the show's two hours, during some very exciting musical numbers. He and his therapist just linger during most of the show like unwanted houseguests. It gets positively creepy. Maybe they deserve the cocktails?

Other bizarre choices quickly come at you, like why 10 dancers have emerged from Diamond's chair to act as a deranged chorus, why set designer David Rockwell has two dozen random dinning room lights hanging at various heights and why choreographer Steven Hoggett has gone from small hand movements to over-the-top Vegas choreography with no coherence.

We go through the time when Diamond wrote hit after hit for others — “I’m a Believer” for The Monkees, “Red Red Wine” for UB40 — but he's low on confidence. “You're too good,” he's told. “No one's interested in me,” he says. A club owner calls him “Hamlet,” we suppose because he's sad? (Has anyone here read “Hamlet”?)

The spine of the story is Diamond's rise to international fame and wealth — bigger than Elvis, he tells us — despite his determined inability to be happy as he marries three times and has multiple children. Loneliness as a child is identified late as a possible cause, in an excruciating final few minutes where you could hear a pin drop as he bares his soul and then that's instantly washed out in multiple brash songs — “Sweet Caroline” in a predictable reprise — and a nonsensical confetti drop.

The book by Anthony McCarten is clearly too respectful — Diamond's horrific movie acting decisions are quickly papered over, for example — and the direction by Michael Mayer never manages to reconcile the sadness with the highs. Diamond’s through-line is not his music but his romantic relationships, and it’s hard to cheer a rich guy who leaves a 25-year-long second marriage.

Some of the songs are nicely presented, like "You Don’t Bring Me Flowers” as a duet between Diamond and his second wife, and a gospel-tinged “Holly Holy,” but others are not: “Forever in Blue Jeans,” is a mess, oversung by Wife No. 2 (Robyn Hurder) and choreographed with random dancers scurrying across the stage doing their own thing, as if in a busy train station. An awkward duet between Diamond's first and second wives is best forgotten, too.

It all seems to culminate in one song, a psychoanalytic breakthrough that's been hiding in plain sight: “I Am... I Said,” with lyrics about a frog who became a king. This song apparently solves everything. Shouldn't the musical be called “Forever in Blue Genes”?

Audience participation is encouraged, and there are points when the show becomes a sing-a-long as it slides into pure pandering. “A Beautiful Noise” knows who its aging audience is and it gives them what they came for, complete with a Khrushchev joke. For the rest of us, there's always cocktails.