Ringo calling! If he wants you to sing, who could say no? 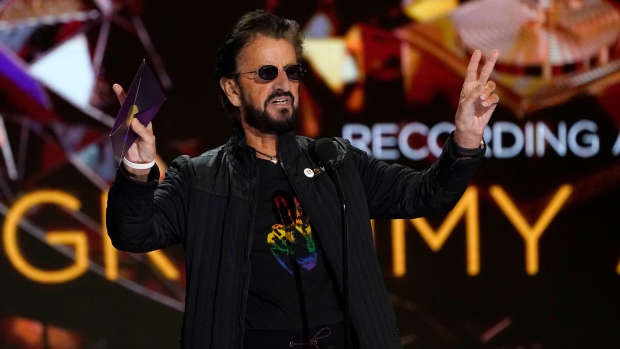 Ringo Starr gestures as he presents the award for record of the year at the 63rd annual Grammy Awards at the Los Angeles Convention Center on Sunday, March 14, 2021. (AP Photo/Chris Pizzello)

LOS ANGELES - If Ringo Starr calls to ask if you'll sing on a song for him, who could possibly say no?

The beloved Beatle dug into his contacts for help on the chorus of “Here's to the Nights,” his most recent song written by Diane Warren, and he recruited quite a choir.

“Here's to the nights we won't remember, with the friends we won't forget,” they all sing. It's a perfect sentiment for the 80-year-old drummer who, as McCartney once sang “has memories longer than the road that stretches out ahead.”

“Everyone was really kind to me to do what they did,” Starr told The Associated Press recently.

Two people did say no, actually. Ringo won't reveal who, but they must have been REALLY busy.

Starr's EP of five new songs comes out Friday. The project gave him something to do during COVID-19 lockdown in his Los Angeles home. He said he divided much of his time between making music, painting and working out.

“Last year I left the house no more than seven times, and I think I'm exaggerating,” he said. “I'm a prime target for this COVID. Now I've had my shots. I feel groovy and there's nowhere to go!”

One place was Sunday's Grammy Awards, where he presented the record of the year honour to Billie Eilish, who - let's do the math here - was born 31 years after the Beatles broke up.

Even a Beatle gets the blues, and Starr said he felt it during the long layoff. He had to cancel gigs with his All-Starr Band last year and, most recently, postponed hopeful plans to go back on the road in May and June, and again in the fall. He'll wait until next year, at least.

“I was really sad in the beginning because I couldn't go on the road,” he said. “I love to play. I love the audience. They love me. I'll go anywhere to be loved!”

He chuckled at that remark. It's one of the things he has in common with his other surviving Beatles mate. They both stay very active musically, love to perform and, with vegetarian diets, are both in the type of shape that others their age would envy.

For Starr, his vehicle the last three decades has been the All-Starr Band, a simple concept that continually regenerates. He invites a rotating crew of veteran musicians, the main requirement being they must have been part of some hit songs, in order to keep the set list varied and fresh.

He said he was so insecure the first time he brought along two fellow drummers: Levon Helm and Jim Keltner.

It turned out to be great fun for Starr, who loves being in a band, as is obvious from his beaming face when he sits behind a drum kit.

It's not a bad track record for a sickly boy who grew up in a rough section of Liverpool, an only child who joined a band that gave him three brothers for life.

“It was a super-incredible connection of peace and love,” Starr said. “It was so great. I still miss John and George, but that's how life is. Paul and I are still great friends and we support each other.”