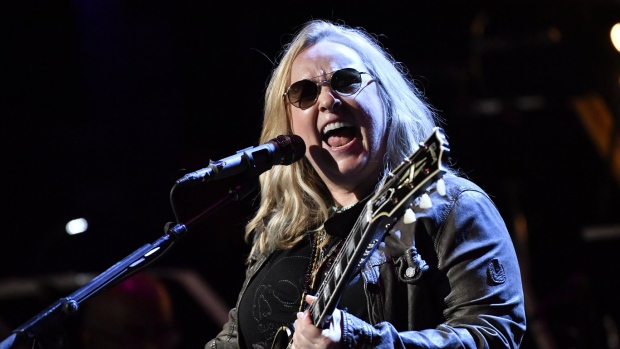 NEW YORK (AP) — Rocker Melissa Etheridge has found a new stage: The Grammy- and Oscar-winner will unveil a solo show mixing her music and stories off-Broadway.

“Melissa Etheridge: My Window – A Journey Through Life” will play 12 performances only starting Oct. 13 at the midtown multi-stage venue New World Stages.

“While I’ve been telling my life stories through my lyrics and concert tours for many years, this is going to be something new for me," Etheridge said in a statement.

"I cannot wait to feel the exchange of energy and deep connection that’s provided by an intimate theater experience. That’s going to rock.”

Etheridge, best known for her songs “Come to My Window” and “I’m the Only One,” has been smitten by theater all her life and even stepped into the Green Day musical “American Idiot” for eight shows in early 2011 on Broadway, replacing Billie Joe Armstrong.

Like Bruce Springsteen's recent Broadway run, her new show will have songs and stories, "from tales of her childhood in Kansas to her groundbreaking career highlights – with all of life’s hits and deep cuts between,” producers said in a statement.

Etheridge's career and life have many twists, including winning an Oscar for writing “I Need to Wake Up” from Al Gore's documentary on global warming, “An Inconvenient Truth,” being diagnosed with breast cancer, coming out when the music industry was less evolved and receiving two Grammys.

The show has been written by Etheridge, with additional material by Linda Wallem-Etheridge, her wife and the co-creator and showrunner for the Emmy Award-winning Showtime series “Nurse Jackie.” It will be directed by Amy Tinkham.

Prior to hitting the New York stage, Etheridge will finish her One Way Out national concert tour and release a graphic novel “Heartstrings” with Z2 Comics.

Etheridge, Springsteen and Armstrong are just a few rock stars who have played New York stages in their own shows, a list that also includes Sting, David Byrne and Sara Bareilles.