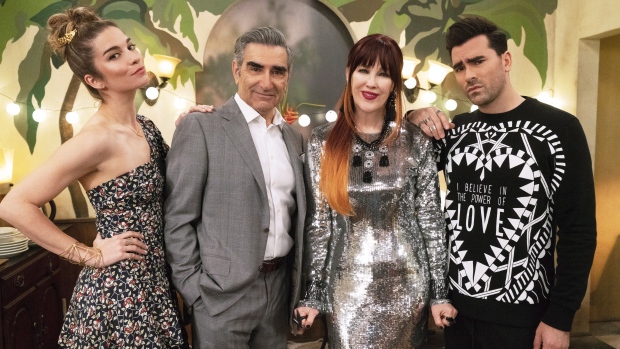 The cast of the television show "Schitt's Creek," Annie Murphy (left to right) Eugene Levy, Catherine O'Hara and Daniel Levy is shown in a handout photo. (THE CANADIAN PRESS/HO-CBC)

TORONTO -- It will be a celebrated ending for "Schitt's Creek" and "Anne with an E" at next month's Canadian Screen Awards, with a slew of nominations for each show.

"Schitt's Creek," which announced last year that the currently running sixth season will be the last, is up for a leading 26 trophies going into Canadian Screen Week. Organizers say that's a record number of nominations for a television series in a single year.

Meanwhile, the CBC coming-of-age story "Anne with an E," which was cancelled in late November after three seasons, is next with 17 nominations.

The leading film contender for this year's Canadian Screen Awards, which will be held March 29, is "The Song of Names" with nine nominations.

The drama, from Quebec director Francois Girard, stars Tim Roth and Clive Owen in a story of a Polish-Jewish refugee and violin virtuoso who disappears before a 1951 concert that was to launch his career.

It's up for trophies including best score and best original song for three-time Oscar-winning composer Howard Shore, who mined his own childhood memories of hearing cantors in his Toronto synagogue to create the film's music.

But while "The Song of Names" leads the film pack, it's not nominated in the top categories of best picture or best director.

That distinction, however, does belong to the Matthew Rankin-directed "The Twentieth Century," which has the second-highest number of film nominations with eight.

The comical reimagining of the formative years of former Canadian Prime Minister William Lyon Mackenzie King is also up for hardware including best screenplay for Rankin and best actor for Dan Beirne.

Netting seven film nominations is "Antigone," which was Canada's submission for consideration for this year's Oscars category of best international feature.

The refugee drama is up for awards including best picture, best director and adapted screenplay for Sophie Deraspe, and best actress for Nahema Ricci, who plays a teenager trying to prevent her brother from being deported.

The other best picture nominees are:

The TV series with the third-highest number of nominations is CTV's crime drama "Cardinal."

The Academy of Canadian Cinema and Television, which administers the awards, announced nominees in a total of 141 film, TV, and digital media categories on Tuesday.

The contenders were chosen by nominating juries and members of the academy.

The awards will be presented over five days, culminating in the March 29 televised show on CBC and the CBC Gem streaming service.

The academy membership will vote between Feb. 18 and March 6 to determine the winners.

"Supporting these voices has never been more important, and we are proud to be at the heart of those efforts," Beth Janson, the academy's CEO, said in a statement.