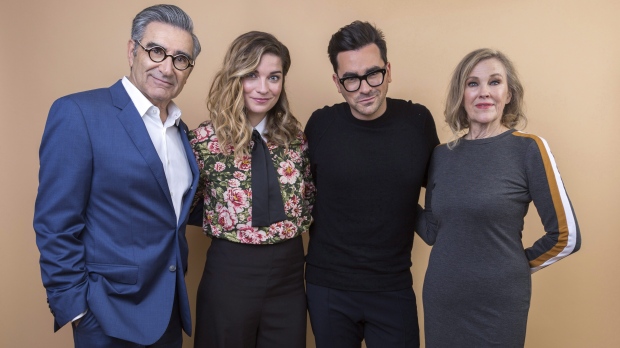 TORONTO - Could there be another “Schitt's” sweep?

As with the Emmys, all four leads of the Ontario-shot show have also snagged acting nominations at the Golden Globes.

Toronto-born Catherine O'Hara is up for her starring role as matriarch Moira Rose, alongside series co-creator Eugene Levy of Hamilton, who plays her husband, Johnny.

Also nominated is Toronto-raised series co-creator and showrunner Daniel Levy for his supporting acting role as their son, alongside Ottawa-born Annie Murphy as their daughter.

“What a way to wake up!” Daniel and Eugene Levy said in a joint statement Wednesday morning, after actors Sarah Jessica Parker and Taraji P. Henson announced the nominations in a livestream put on by the Hollywood Foreign Press Association.

“We are so proud of the entire cast and crew of 'Schitt's Creek,' and we are thrilled to celebrate the end of this series with the show's first Golden Globe nominations.”

A “Schitt's Creek” representative said no one from the cast was available for an interview Wednesday.

The series, which aired on CBC and Pop TV, ended its sixth and final season last April.

It became a pop-culture phenomenon with its look at a family who lost their fortune and had to live in a motel in a small town.

“Schitt's Creek” has some stiff competition for best TV musical or comedy series at the Golden Globes: “Emily in Paris,” “The Flight Attendant,” “The Great” and “Ted Lasso.”

MORE: Complete list of nominees for the Golden Globe Awards

Other Canadian Emmy nominees this year include New Brunswick-born Donald Sutherland for playing the powerful father of Nicole Kidman's character in the HBO miniseries “The Undoing.” Kidman and star Hugh Grant are also nominated for their roles in the psychological thriller, which is also up for best television limited series or motion picture made for television.

Sutherland is nominated in the same category as Daniel Levy: best performance by an actor in a supporting role in a series, limited series or motion picture made for television.

“I'm thrilled. Just thrilled. For all of us, dear Nicole and Hugh,” Sutherland, who was unavailable for an interview, said in a statement.

“I loved doing 'The Undoing' with them under the eye of Susanne Bier. She was terrific and the character written by David E. Kelley was a joy to play.”

Tina Fey and Amy Poehler will host the awards ceremony, which might be held virtually, on Feb. 28.

This report by The Canadian Press was first published Feb. 3, 2021.