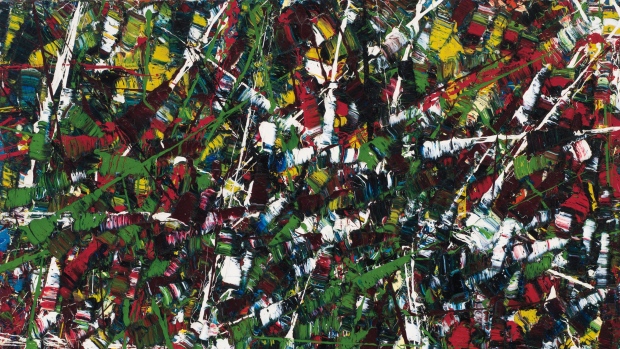 Leading the Toronto auction house's fall sale is Riopelle's 1953 canvas "Sans titre," which comes with a pre-sale price tag of $1.2 million and $1.8 million.

Also among the highlights is "La ligne d'eau," a large-scale work from Riopelle's "Iceberg" series, which auctioneers project could fetch between $800,000 and $1.2 million.

Heffel says each of the Harris works depicts a different facet of Canada's variegated landscape, including the 1924 oil-on-board "Pyramid Mt., Jasper Park," which is estimated to be worth $200,000 and $300,000.

Group of Seven member Frederick Varley's portrait of his muse, Vera Weatherbie, in "Green and Gold, Portrait of Vera" is expected to garner between $500,000 and $700,000.

Heffel says it's presenting another auction first in "Steamer Arriving at Nanaimo" by B.C. painter E.J. Hughes, who counted Harris and Varley among his mentors. The auction house is anticipating bids for the 1950 canvas will range from $500,000 to $700,000.

In total, Heffel says that the more than 100 works up for sale could collectively bring in between $10 million and $15 million.

Collectors will be able to place their offers through telephone, absentee and online bidding tonight.