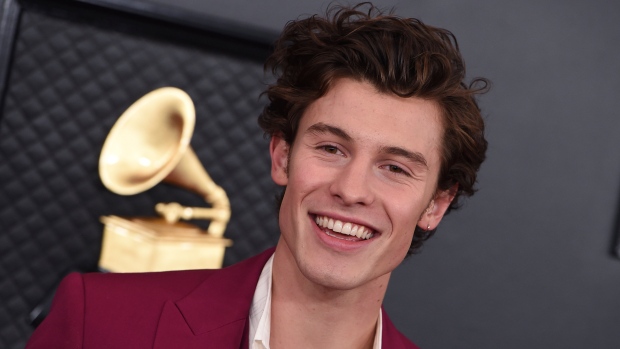 Shawn Mendes arrives at the 62nd annual Grammy Awards at the Staples Center on Sunday, Jan. 26, 2020, in Los Angeles. (Photo by Jordan Strauss/Invision/AP)

TORONTO - It was never going to be a banner year for Canadians at the Grammy Awards, since only a handful of homegrown artists were nominated, but this one really stings.

All of the Canadian contenders, who also included Michael Buble and Daniel Caesar, were competing in categories that were presented during a ceremony before the main television broadcast event hosted by Alicia Keys.

Steve Wood, co-founder of Northern Cree, didn't win best regional roots music album, which means the group is now zero for nine on the Grammys count. His group was nominated for “When It's Cold - Cree Round Dance Songs.”

But Wood isn't sweating another loss, he said, since the Grammys offer an opportunity to shine in other ways. He was looking forward to showcasing First Nations cultures and fashion on a global scale.

“It's always a win for us when we represent our people in circles where we're getting our voice out,” Wood said by phone shortly before stepping onto the Grammys red carpet.

“Our music is alive as well, and some day maybe we'll get to that point of having it recognized on that stage,” he added.

Drake was the leading Canadian with nods for two different collaborations with Chris Brown and Rick Ross. He won neither category.

Among the other mainstream contenders, Jesse Reyez was nominated for best urban contemporary album with her EP “Being Human in Public,” a prize that was ultimately picked up by breakout American star Lizzo.

Despite the losses, Canadians were represented well on the red carpet before the main event.

YouTuber turned late-night host Lilly Singh was spotted handing out candies from her purse to onlookers, while masked indie-country singer Orville Peck dazzled in a white cowboy gear alongside chart-topping music producer Diplo, who was dressed similarly, but all in black.

Shania Twain, who has five Grammys to her name, joined Bebe Rexha on the broadcast to present Dan + Shay with their second career Grammy for country duo or group performance for their song “Speechless.”

This report by The Canadian Press was first published Jan. 26, 2020.

Shania Twain arrives at the American Music Awards on Sunday, Nov. 24, 2019, at the Microsoft Theater in Los Angeles. (Photo by Jordan Strauss/Invision/AP)

Drake accepts the award for best rap song for "God's Plan" at the 61st annual Grammy Awards on Sunday, Feb. 10, 2019, in Los Angeles. From Shawn Mendes to Drake, the line-up of Canadian nominees at the 2020 Grammy Awards are old pros in the Top 40 community. THE CANADIAN PRESS/Invision/AP-Matt Sayles