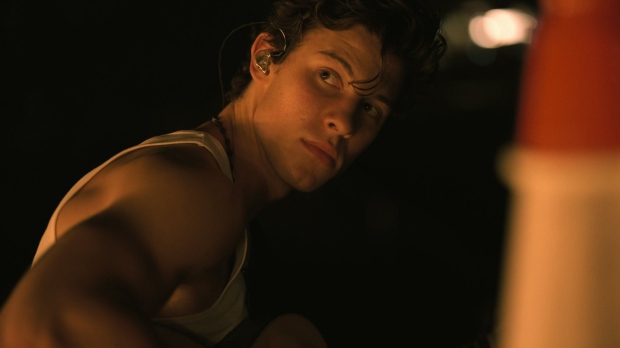 Shawn Mendes is shown in a scene from "In Wonder" in this handout photo. Canadian pop star Shawn Mendes says the much buzzed-about shower scene that opens his new Netflix documentary was a result of great trust between himself and the director.THE CANADIAN PRESS/HO, Netflix

TORONTO - Canadian pop star Shawn Mendes says the much buzzed-about shower scene that opens his new Netflix documentary was a result of great trust between himself and the director.

The singer-songwriter from Pickering, Ont., did a Q-and-A with director Grant Singer via video conference Thursday for members of the media to promote the “Shawn Mendes: In Wonder” film.

Mendes said Singer spent a lot of time building their relationship and making him comfortable with having a camera around before filming.

He said by the time they shot the hotel-room shower scene, which shows Mendes from the waist up and has generated a lot of chatter online, they had developed a good friendship.

“Grant, I've been asked so many times about the shower scene and how I felt about doing a shower scene,” Mendes said, explaining that the deeper they got into filmmaking, the more they wanted to make it “vulnerable and raw” and develop a sense of closeness.

“If you were filming me for another year, it would have been like waking up in bed with me in the morning and being like, 'So how did you sleep?”' he added with a laugh.

Singer noted they shot the scene on a day when Mendes was on vocal rest.

“It was like, the door was open and it just felt by that point we had this trust where you knew you were being filmed and there was something that, if it wasn't appropriate for me to be filming, I wasn't going to be in the room,” he said.

“Also keep in mind, when we were shooting that, we didn't know it was going to make it into the documentary. We were just shooting. It just happened to resonate thematically because that was the day where you lost your voice, or the day after. So it narratively played a part and why it's in the movie.”

Mendes, who releases his fourth album “Wonder” on Friday, allowed Singer to follow him around on tour and in his personal life in the film.

Cameras capture him in his childhood home in Pickering, east of Toronto, where he first got the world's attention performing in short videos on the now-defunct Vine platform.

The 22-year-old, of course, has gone on to megafame with hits including “In My Blood,” “Stitches,” “Treat You Better” and “If I can't Have You.”

“In Wonder” also shows Mendes with his family and his girlfriend, fellow singer Camila Cabello, with whom he made the 2019 hit “Senorita.”

“As an artist, it's very easy to believe people want to take advantage of you and play into the sides of you that media wants to eat up,” Mendes said. “But I know Grant and I know how he is about art.”