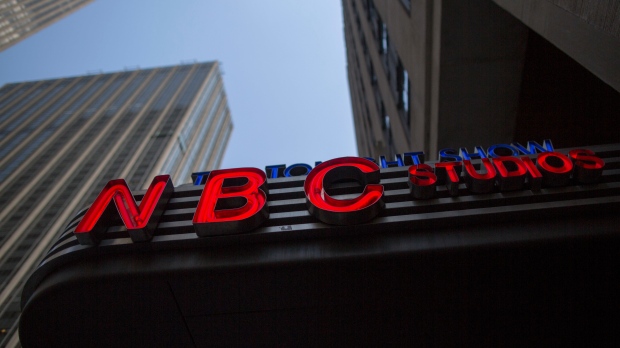 An NBC logo at their television studios at Rockefeller Center in New York, May 10, 2017. THE CANADIAN PRESS/AP-Mary Altaffer

TORONTO - The latest episode of “Saturday Night Live” had a Canadian-themed sketch, complete with references to Drake, “Degrassi” and the CBC.

She stood in front of a green screen image of Toronto's waterfront for a news channel segment called “Drake Watch,” and held a microphone emblazoned with the CBC logo.

Rae and two news anchors had French accents as they chatted about whether she had seen the Toronto rapper.

She said she confused him with a man in a wheelchair, which is a reference to Drake's character Jimmy Brooks from his days starring on the Canadian series “Degrassi: The Next Generation.”

There were some other Canadian elements to the “SNL” episode on NBC and Global -- Toronto-born actor Jim Carrey returned to play U.S. Democratic presidential candidate Joe Biden, and Stratford-Ont.-raised pop star Justin Bieber was the musical guest.

“SNL” is back to airing episodes from Studio 8H at Rockefeller Center in New York, after doing remote performances during the COVID-19 lockdown last season.