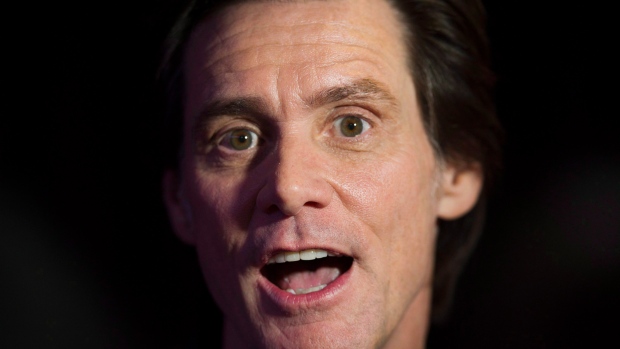 Actor Jim Carrey speaks to reporters as he arrives for the Just for Laughs awards show at the annual comedy festival in Montreal, Friday, July 28, 2017. THE CANADIAN PRESS/Graham Hughes

The NBC sketch series has posted a short teaser video for this weekend's season premiere, showing the Toronto-born actor getting his hair, makeup and wardrobe done for the part.

In the clip, he dons a white-haired wig, a suit and black Converse sneakers, and puts on aviator sunglasses with a suave smile at the end.

Beside him is Maya Rudolph as Biden's running mate, Sen. Kamala Harris.

Former cast member Chris Rock will host and Megan Thee Stallion will be the musical guest.

This will be the first live “SNL” episode from Studio 8H at Rockefeller Center in New York since the COVID-19 shutdown.

When the pandemic broke last season, the series staged episodes remotely, with cast members performing in pre-recorded segments from their homes.

Toronto-raised “SNL” creator and executive producer Lorne Michaels recently talked with the New York Times about the pandemic precautions the show is taking.

He said they felt they had to return to the studio, noting: “It's difficult, but we've done difficult a lot of times. Comedy, when there's a little danger involved, it doesn't necessarily suffer.”

Carrey has hosted “SNL” before. The announcement that he'll play Biden stirred up debate on social media and in opinion pieces about the show giving such big parts to celebrities instead of current cast members.

This report by The Canadian Press was first published Oct. 2, 2020