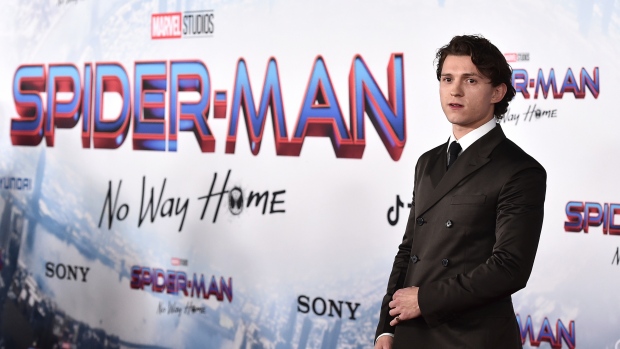 FILE - Tom Holland arrives at the premiere of "Spider-Man: No Way Home" at the Regency Village Theater on Monday, Dec. 13, 2021, in Los Angeles. 'Spider-Man: No Way Home' has swung back on top of the box office during a holiday weekend where American theaters aimed to lure moviegoers with discounted $3 tickets. The first 'National Cinema Day' nationwide promotion appeared to work with the highest-attended day of the year, drawing an estimated 8.1 million moviegoers on Saturday, Sept. 3, 2022, according to The Cinema Foundation. (Photo by Jordan Strauss/Invision/AP, File)

LOS ANGELES (AP) - “Spider-Man: No Way Home” has swung back on top of the box office during a holiday weekend where American theaters aimed to lure moviegoers with discounted $3 tickets.

The first “National Cinema Day” nationwide promotion appeared to work with the highest-attended day of the year, drawing an estimated 8.1 million moviegoers on Saturday, according to The Cinema Foundation. The one-day event - offered on more than 30,000 screens and held in more than 3,000 theaters, including major chains AMC and Regal Cinemas - collected preliminary box office returns of $24.3 million, according the Comscore.

National Cinema Day was intended to flood theaters with moviegoers during a Labor Day weekend, which is traditionally one of the slowest weekends in the industry. The promotion looked to prompt people to return in the fall, inspired by a sizzle reel of the upcoming films from major studios including Disney, Lionsgate, Sony and A24.

“This event outstripped our biggest expectations,” said Jackie Brenneman, president of the Cinema Foundation, a nonprofit arm of the National Association of Theater Owners, in a statement. “The idea of the day was to thank moviegoers for an amazing summer, and now we have to thank them for an amazing day.”

Some other countries have experimented with a similar day of cheap movie tickets, but Saturday's promotion was the first of its kind on such a large scale in the U.S. Organizers of the National Cinema Day said the event could become an annual fixture.

The top three performing movie titles for the day included Tom Cruise's “Top Gun: Maverick,” The Rock and Kevin Hart's “DC League of Super Pets” and Brad Pitt's “Bullet Train.” Another top draw was “Spider-Man: No Way Home,” which recaptured the No. 1 box office spot for the weekend.

With never-seen footage, the re-release of the Sony and Marvel blockbuster superhero film starring Tom Holland and Zendaya brought in an estimated $6 million. “Top Gun” followed with $5.5 million, “Super Pets” garnered $5.45 million, “Bullet Train” pulled in $5.4 million and last week's top earner “The Invitation” grossed $4.7 million to round out the top five.

The re-release of Steven Spielberg's 1975 classic “Jaws,” on big screens for the first time in 3D, nabbed the final spot among the weekend's top 10 performers.