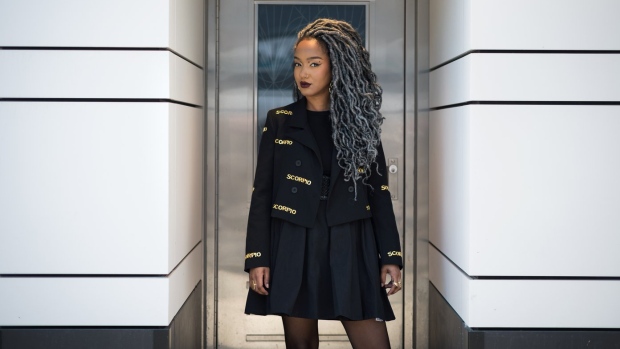 Amanda Parris, poses for a photograph prior to a screening of her episodic series, Revenge of the Black Best Friend, at Paradise Theatre in Toronto, on Monday, March 28, 2022. THE CANADIAN PRESS/ Tijana Martin

Kayla Grey, Kathleen Newman-Bremang and Amanda Parris say being named winners of the Academy of Canadian Cinema and Television's inaugural Changemaker Award is "a daunting honour" but also "a hopeful sign" of change to come.

The award, which will be presented at Sunday night's Canadian Screen Awards, recognizes those bringing attention to systemic racism and promoting equity and inclusion in Canadian media.

"For the Canadian Screen Awards to give us this honour, I think they are also committing to more work," says the Toronto-based Newman-Bremang, deputy director of Unbothered, Refinery29's online community for Black women.

"You can't put the three of us on something and say that you respect our work if you're not also willing to continue this conversation."

For this trio, that conversation has often been about how to create more space for fellow Black journalists and how to amplify stories that are not being heard.

"I'm part of a continuum of people that have been consistently attempting to push this industry into spaces that it keeps on saying it doesn't want to go," says the Toronto-based Parris, CBC host, playwright and screenwriter.

But, she adds, it's hard to say if significant change has come, "because the doors that have been opened and the spaces that have been made have not been structural, meaning they can be closed up again.

"Until there is structural change, then I don't know that the idea of a changemaker makes the most sense," she says.

"I think we trigger conversations, we infiltrate, we subvert, but I don't know that it's on us, we don't have that kind of power."

For Grey, the first Black woman to host a flagship sports show in the country with TSN's "The Shift," the label of "changemaker" is a tough one because she considers working to help her own simply who she is — not something "radical."

"I get introduced as 'the first' and I don't want to be that anymore," says the Toronto native.

"I want to be like, 'Yes, and look who's come behind me and who is beside me.' This industry doesn't ensure that people that look like me are not the last, and it's lonely.

"It's such a beautiful feeling to be and work around people that look like you and I want people to truly experience that here."

Sunday's celebration, set to air on CBC and CBC Gem, will focus on the marquee film and TV categories. Overall nominations are led by the Indigenous thriller "Night Raiders" and CBC's gender-fluid millennial dramedy "Sort Of."

Other ceremonies to unfold nightly this week include salutes to sports programming, children's and animation, lifestyle and reality, drama and comedy crafts, and cinema.

Parris says she finds joy in working to connect with a diverse audience, broaden the CBC's reach and court the next generation.

But she says "there is a degree of weight that comes with that."

"You add on ancestral responsibility and you're feeling it on so many levels, the pressure that we all carry with us.

"You wonder what it would be like if I weren't walking with all of those things, how would my imagination run free?"

Newman-Bremang says there is a privilege to the pressure, because there have been so few Black women in the same rooms as they've been and, with time, there comes an ability to navigate those white spaces and speak to those white supervisors.

Which, in the end, can lead to creating new spaces and hiring new supervisors who look much more like them.

According to that same CAJ survey, white respondents made up at least eight out of 10 supervisory roles, while Black respondents were twice as likely to work part-time jobs as full-time jobs.

It's a key reason why the biggest change that this year's changemakers would like to see is the hiring of more Black, Indigenous and people of colour, especially in executive roles.

Retention, too, is important, Grey says, and must come with active support for employees of colour, a healthier work culture, and "real conversations" about fair pay.

Ultimately, it's work these women hope to see the entire industry come together to do, though building a bridge for those who look like them will always be a priority.

"We're at that pivotal moment where we can break the system because we're in. That, to me, is why there's immense pressure, but I don't shy away from it," says Grey.

"I embrace it, because it is such a privilege to be invited into these rooms and be given tools to knock down walls so that more people can show up and join us in these spaces ... so that we can all say, 'I am thriving.'"

This report by The Canadian Press was first published April 5, 2022.