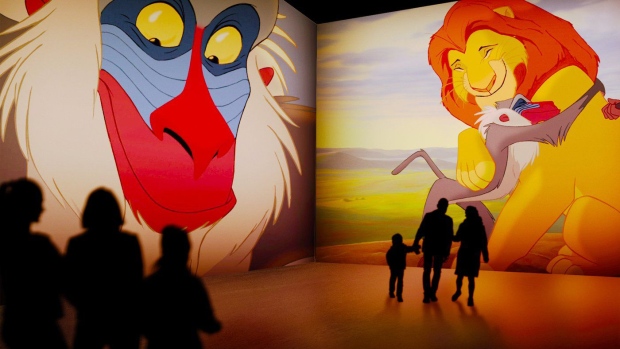 The Toronto-based company behind the esthetic blockbuster known as "Immersive Van Gogh" is partnering with Disney to create an exhibit showcasing highlights of animated classics including "The Lion King" and "Frozen." THE CANADIAN PRESS/HO-Lighthouse Immersive Studios

TORONTO - The Toronto-based company behind the esthetic blockbuster known as Immersive Van Gogh is partnering with Disney to create an exhibit showcasing highlights of animated classics including “The Lion King” and “Frozen.”

Lighthouse Immersive Studios, which uses set pieces and projection screens that envelopes the floors, walls and surrounding environment with art,announced Thursday it's collaborating with Walt Disney Animation Studios on their latest project, set to launch in Toronto this December before moving on to international markets.

Canadian producer J. Miles Dale, who won an Oscar for “The Shape of The Water,” is the creative lead on the project called Disney Animation: Immersive Experience, which he says taps into a cultural desire for entertainment that's less passive than traditional screenings or exhibits.

Several other companies operate similar multimedia exhibitions in Canada and globally, a trend that started gaining popularity in the mid-aughts and picked up steam in the past few years.

“Since Disney began as a company, they were the first to sync sound on animation and the first to add colour to cartoons,” says Dale, who initially introduced the idea of collaborating with Disney to Lighthouse Immersive founder Corey Ross.

“I think they realized that they didn't want to be left behind with this new medium happening...It was a way to expand their brand and for people who can't necessarily get to the parks to come and see a different side of what they love.”

Although most pandemic restrictions in Canada lifted this past spring, cinemas and theatres say bringing audiences back has been a challenge.

Dale says he believes the scale of the experiential Disney project will be an incentive for families that may otherwise be cautious about getting out of the house.

Ross agrees, saying that while the pandemic may have influenced newly formed indoor dependencies for some, the type of entertainment his company offers combined with the Disney brand will be an attraction.

“I still think at the end of the day, this type of communal experience is important to society and individuals. It may take extraordinary new ideas to get people away from their home and I'm hoping that this has a role in doing that.”

Upon opening, visitors will be greeted with themes that span the gamut of more than40 Disney properties, from animations as old as “Steamboat Willie” from 1928 to more recent Disney films such as “The Lion King,” “Frozen” and “Encanto.”

One of the challenges creators faced was figuring out a way to bring an added dimension of life to films that were already animated and fully formed visually and audibly. With the Van Gogh show, seeing still art come to life was part of the appeal, but that element already exists with the Disney films, he explains.

“We've deconstructed these films and created four dimensions of protection so that it surrounds. You're inside the world and we've brought it all together thematically.”

Ross says that the conceptual seeds for Disney Animation: Immersive Experience were sowed from the success of the company's version of Immersive Van Gogh, which debuted in Toronto in 2020. Since then, they have provided similar treatments to Frida Kahlo, King Tut, Gustav Klimt, and showcased exhibits in more than 20 North American cities.

Elaborate images and projections would shift with different shades of colour, blending VR and moving paintings into a singular space.

“We opened in Toronto with huge success and moved that to the United States where we sold over 5 million tickets,” says Ross. “That means, one in 90 American citizens had a ticket to the Van Gogh experience, so we had all this incredible success and money to go with it.”

After Toronto, “Disney Animation: Immersive Experience” is set to move to U.S. cities including Nashville, Boston, and Las Vegas next year.