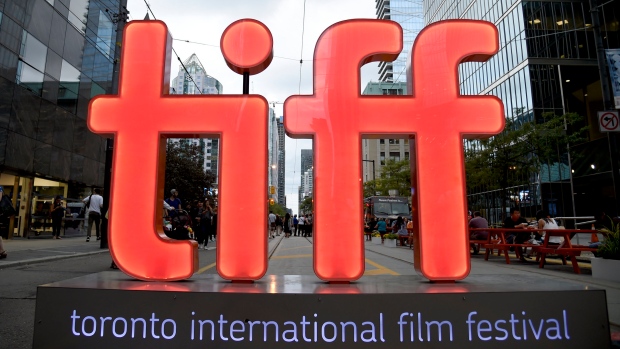 FILE - In this Thursday, Sept. 6, 2018, file photo, a view of a festival sign appears on Day 1 of the Toronto International Film Festival in Toronto. Organizers announced Tuesday, July 20, 2021, that among the films that premiere at this year’s TIFF will be the adaptation of the Tony-winner “Dear Evan Hansen,” which will open the festival, Edgar Wright’s ’60s London themed “Last Night in Soho,” and “The Eyes of Tammy Faye.” TIFF runs Sept. 9-18. (Photo by Chris Pizzello/Invision/AP, File)

Organizers on Tuesday revealed the first selections of high-profile gala and special presentations slots for the 46th edition, which runs Sept. 9 to 18.

Newly announced star-studded features making world premieres include “The Eyes of Tammy Faye” by Michael Showalter, Barry Levinson's biographical boxer drama “The Survivor” and Michael McGowan's Canadian adaptation “All My Puny Sorrows.” They're among more than 100 films set to screen digitally and in-person at downtown drive-in and open-air cinemas, as well as some in-person venues, including TIFF Bell Lightbox and Roy Thomson Hall.

TIFF co-head and artistic director Cameron Bailey said the festival wants to stage this year's galas and special presentations as safely as possible while reviving some pre-pandemic excitement.

Still, red carpets will likely be smaller than usual and be held indoors - a departure from the usual outdoor media spectacles that attract hordes of fans seeking hugs, photos and autographs from celebrities.

TIFF co-head and executive director Joana Vicente said they're still trying to figure out whether local press and industry will also need to be fully vaccinated, and what COVID-19 testing might be required.

“We know that everyone who will come into Canada will need to be tested and have a proof of vaccine, so that's already taken care of,” Vicente said in an interview.

“We're just taking a lot into consideration and figuring out what are the right safety and health measures.”

Amy Adams, Julianne Moore and Kaitlyn Dever are among the other cast members in the story directed by Chbosky, who's known for his film and novel “The Perks of Being a Wallflower.”

The feature, which will have its world premiere with a gala presentation at Roy Thomson Hall, follows in the footsteps of past music-filled TIFF openers including “American Utopia,” “Once Were Brothers: Robbie Robertson and The Band,” the U2 documentary “From the Sky Down” and “Score: A Hockey Musical.”

“It's a movie that's got so much hope to it, that has this beautiful soaring score,” he said in an interview Tuesday.

“A great cast, a great story and a tone that I think is what we want to start with: We've been through a tough year, we're not afraid of facing tough issues in life, but we want to focus on the hope.”

Chinese director Zhang Yimou's “One Second,” about the connection between a travelling film projectionist and an escaped prisoner, will close the fest.

“He set it in the 1970s and during the Cultural Revolution in China, at a time when movies were really one of the few ways that people could be entertained as a group,” Bailey said.

“And so you really get a sense of, when you have very little else, how movies can transport you and how they can transform you.”

Vicente said that's one of the themes of the festival, after over a year of devastating theatre shutdowns: “Just reminding people of the magic of coming together to watch a film and get immersed.”

TIFF announced 10 galas and 22 special presentations Tuesday, including “All My Puny Sorrows,” based on the Miriam Toews book. Alison Pill and Sarah Gadon star in the adaptation of a tale inspired by the Manitoba author's relationship with her older sister and father.

Then there's Walt Becker's “Clifford the Big Red Dog,” a Canada/United States/United Kingdom co-production based on the children's book series about a giant red pooch.

“I love that people are like, 'What?”' Bailey said with a laugh about social media reactions to “Clifford” being in the lineup.

“'Clifford' is just super fun. It's really that simple,” he added, noting it's a well-known story with “big Hollywood visual effects” and an all-star cast including David Alan Grier as the voice of Clifford.

“For every family who's had kids at home for a long time and just missed taking them out to a big screen adventure, this is for you.”

TIFF said it added Scotiabank Theatre Toronto to its screening venues for the first five days of the festival, and will also show films at the Princess of Wales Theatre and the Cinesphere Theatre at Ontario Place.

This report by The Canadian Press was first published July 20, 2021.