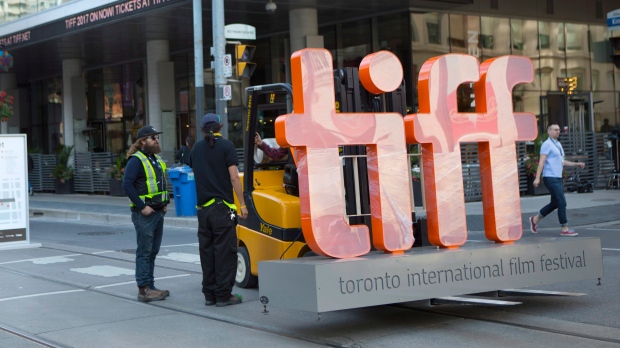 A sign bearing the Toronto International Film Festival logo sits on a fork lift as preparations are made for the festival's opening night on Thursday September 7, 2017. THE CANADIAN PRESS/Chris Young

TORONTO - The Toronto International Film Festival is giving more details on a hybrid festival that will largely feature digital screenings for home viewers but will also offer in-person screenings at venues such as TIFF Bell Lightbox and the Isabel Bader Theatre.

TIFF co-heads Cameron Bailey and Joana Vicente say the cost will be the same whether in-person or online, with regular screenings priced at $19 including taxes and fees, and premium ones going for $26.

Cars of one or two people can catch TIFF titles at the Visa Skyline Drive-In at CityView, and RBC Lakeside Drive-In at Ontario Place for $49 including taxes and fees, while cars with three or more people cost $69.

And open-air screenings at the West Island Open Air Cinema at Ontario Place can accommodate two people on a “lawn pod” for $38 including taxes and fees.

Anyone in Canada will be able to check out TIFF's secure digital platform, called Bell Digital Cinema, and stream watermarked titles to their TV through Chromecast or a newly developed TIFF app set for release at the Apple App Store on Sept. 9.