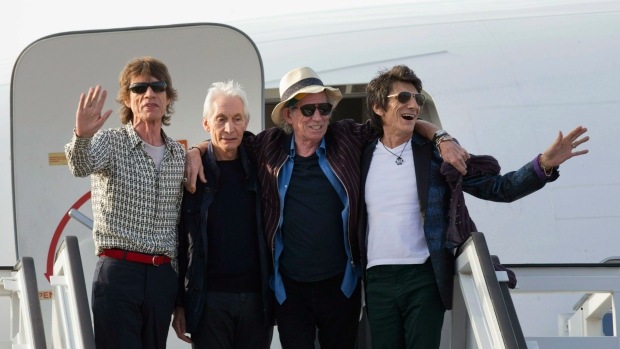 In this March 24, 2016 file photo, members of The Rolling Stones, from left, Mick Jagger, Charlie Watts, Keith Richards and Ron Wood pose for photos from the plane that brought them to Cuba at Jose Marti international airport in Havana, Cuba. (AP Photo/Ramon Espinosa File)

It's only been a few months since lead singer Mick Jagger was rushed into heart surgery, throwing their North American tour into turmoil, and the band is already back in concert mode.

The British rocker says "We thank our lucky stars."

News of Jagger's surgery blindsided his bandmates shortly after they started rehearsals in Miami earlier this year.

Doctors ordered Jagger to hang up his microphone, at least temporarily, to undergo medical treatment.

At 75, nothing was certain about how quickly he would recover.

The 72-year-old Wood says the band was "all gobsmacked" by the developments, but they rallied around Jagger before going their separate ways while he prepared for surgery.

He says once they got a thumbs up from Mick they could breathe a sigh of relief and carry on with their lives again.

Luckily for fans, concert stops for the Stones' No Filter Tour went mostly unaffected, including the only Canadian show on June 29th.

Wood is confident the band's renewed thirst to perform will translate to the outdoor stage at the Burl's Creek Event Grounds in Oro-Medonte, Ontario, about 30 kilometres north of Barrie.

He says based on rehearsals -- they're ready.

"We just need an audience now."