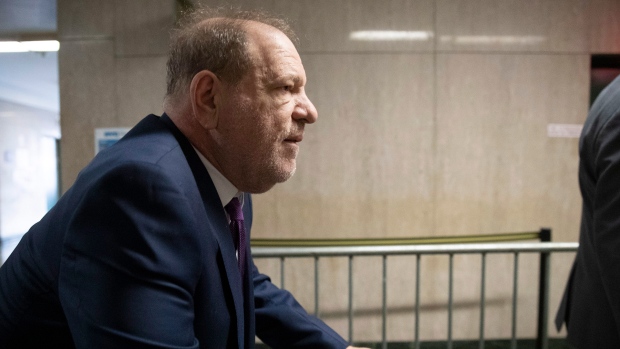 NEW YORK -- The closely watched #Metoo era rape trial of Harvey Weinstein is moving at a faster pace than predicted, with three more of his accusers expected to testify against the disgraced movie mogul before the end of the week.

A slate of secondary witnesses are due on the witness stand Tuesday to testify before a Manhattan jury about records related to the investigation of Weinstein. The rest of the week could see two women testify about alleged “prior bad acts” by Weinstein - called “Molineux” witnesses - followed by a key witness who says he raped her at a hotel in 2013.

A final Molineux witness would testify next Monday, completing the bulk of a prosecution case that began last Wednesday when there was an expectation that the trial could stretch into March.

On Monday, a second woman at the heart of the case, former “Project Runway” production assistant Mimi Haleyi, wept at times as she detailed her allegation that Weinstein forced oral sex on her at his New York City apartment in 2006.

“I did reject him, but he insisted. Every time I tried to get off the bed, he would push me back and hold me down,” she told jurors, adding that she told Weinstein she was menstruating in an attempt to deter him.

Haleyi, now 42, testified that she thought, “I'm being raped,” and considered different options. “If I scream rape, will someone hear me?” she said she wondered.

Lawyers for the 67-year-old Weinstein have insisted any sexual encounters were consensual and zeroed in on his accusers' continued contact with him after the alleged assaults.

One of his attorneys, Damon Cheronis, showed jurors a friendly email Haleyi sent Weinstein after they ran into each other at the Cannes Film Festival in 2008.

On cross-examination, Haleyi conceded she'd been in contact with Weinstein “not often, but yes occasionally,” and that she sent the 2008 email after a newspaper article reminded her of a conversation they had weeks before the alleged assault.

Last week, “Sopranos” actress Annabella Sciorra testified that Weinstein overpowered and raped her after barging into her apartment in the mid-1990s. While outside the statute of limitations for criminal charges, Sciorra's allegations could be a factor as prosecutors look to prove Weinstein has engaged in a pattern of predatory behaviour.

The Associated Press does not typically identify people who say they have been victims of sexual assault, unless they agree to be named as Haleyi and Sciorra have.