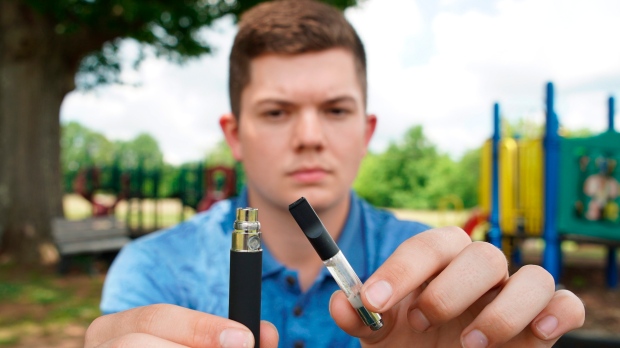 Jay Jenkins holds a Yolo! brand CBD oil vape cartridge alongside a vape pen at a park in Ninety Six, S.C., on Wednesday, May 8, 2019. Jenkins says two hits from the vape put him in a coma and nearly killed him in 2018. (AP Photo/Allen G. Breed)

KENOSHA, Wis. - Kenosha County prosecutors say the mother of two brothers accused of manufacturing vaping cartridges with THC oil was aware of the illegal activity and allowed some products to be manufactured at her real estate office.

A criminal complaint charging Courtney Huffhines with manufacturing or delivering THC alleges some vape cartridges were assembled in the Realty Executives office before the operation was moved to a condo rented by one of Huffhines' sons. Investigators say the 43-year-old mother knowingly participated in the illegal operation.

Authorities earlier arrested 20-year-old Tyler Huffhines and 23-year-old Jacob Huffhines. Hundreds of illnesses around the country have been linked to vaping, but authorities have not singled out a product or ingredient as the culprit.