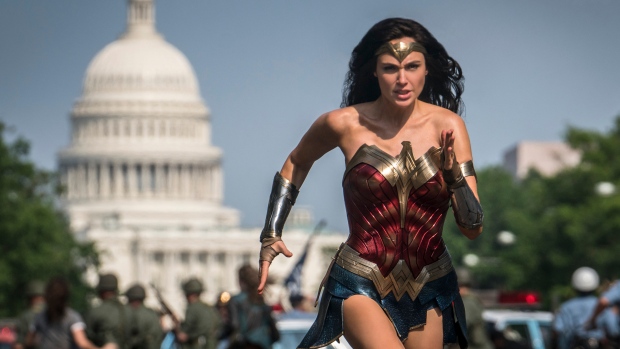 TORONTO - “Wonder Woman 1984” will make history in the United States when it becomes the first superhero blockbuster to debut simultaneously in theatres and on a streaming platform, but for Canadians, the viewing options won't be so revolutionary.

A representative for Warner Bros. says the DC Comics adventure will take the more traditional big-screen route here, opening exclusively in markets across Canada where cinemas haven't been closed by local COVID-19 measures on Dec. 25.

It's a decision that's angered many comic book fans who've hung their hopes on a Canadian streaming platform stepping in to acquire the rights to “Wonder Woman 1984” at a time when people are being encouraged to stay at home.

But the negotiations behind such an unprecedented streaming pact are far more complicated, and costly for all parties involved, especially since 2017's “Wonder Woman” grossed over US$800 million at the global box office.

The U.S. home of the sequel is HBO Max, a streaming platform that shares the same corporate umbrella as Warner Bros., telecommunications giant AT&T.

HBO Max, which launched in May, has been looking for ways to generate buzz that would attract enough subscribers to compete with Netflix and Disney Plus.

“Wonder Woman 1984” will be exclusive to the service for a month in the U.S. before being made available for on-demand rental a few weeks later.

HBO Max doesn't operate as a streaming service outside the U.S., though some of its higher-profile TV shows and made-for-streaming original films are licensed to Bell Media's Crave platform in Canada.

That left Warner Bros. to determine how to distribute “Wonder Woman 1984” outside the U.S. The film will begin opening in international markets starting on Dec. 16.

Debuting on a U.S. streaming platform introduces many uncertainties into the equation, including how severely the sequel's rollout will be affected by widespread piracy of a high-definition version lifted from HBO Max, which could discourage some moviegoers from even considering a visit to their local theatre.

Ellis Jacob, president and CEO of Cineplex, the largest Canadian film exhibitor, acknowledged that by showing “Wonder Woman 1984” his company is making some exceptions in “unique times.”

The theatre operator usually holds distributors to a 90-day policy for the window between a film's theatrical debut and its premiere at home, but Jacob said he believes Warner Bros. understands the “importance of a theatrical release and the power of the big screen.”

But Cineplex also faces the possibility that a growing number of its theatres will be forced to close in the coming weeks due to the pandemic, many of them in the largest markets.

“Between now and opening day, we will continue our outreach with all levels of government to remind them that the theatrical experience is safe,” Jacob added.

A representative for Crave says while a deal wasn't struck to bring “Wonder Woman 1984” to the platform during its theatrical run, the film “will stream on Crave following its standard theatrical windows.”

This report by The Canadian Press was first published November 19, 2020.