Would you be mine? Hanks unveils his Mr. Rogers at festival 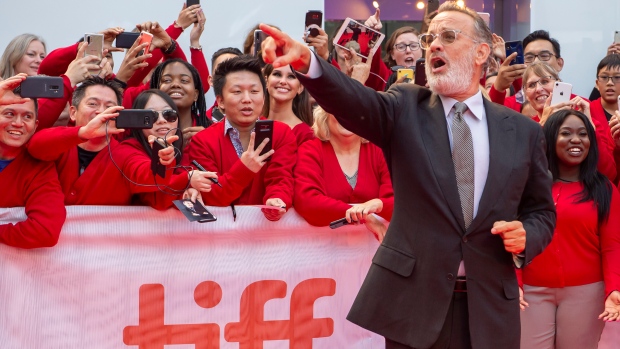 Tom Hanks arrives for the Gala Premiere of the film "A Beautiful Day In The Neighborhood" at the 2019 Toronto International Film Festival on Saturday September 7, 2019. THE CANADIAN PRESS/Frank Gunn

NEW YORK -- Ever since it was first announced, the idea of Tom Hanks playing Mr. Rogers has seemed like dream casting, a match as snug as a warm zip-up sweater.

"A Beautiful Day in the Neighborhood," starring Hanks as the host of "Mister Rogers Neighborhood," premiered Saturday night at the Toronto International Film Festival, revealing a nuanced and layered performance by Hanks that goes well beyond the cardigan.

The film, which will open in theatres Nov. 22, isn't a Fred Rogers biopic but dramatizes the true story of magazine journalist (Matthew Rhys, playing a fictionalized version of writer Tom Junod) who went to Pittsburgh to profile Rogers for Esquire magazine.

Directed by Marielle Heller ("The Diary of a Teenage Girl"), "A Beautiful Day in the Neighborhood" focuses on how an encounter with the hyper-sensitive, open-hearted Rogers transformed the cynical New York reporter. Hanks' performance is only a part of the drama, but his gentle, whole-body transformation into Rogers drew thunderous applause from festival audiences and rave reviews from critics. "Hanks isn't just good -- he's transporting," wrote Variety.

"We never make fun of Fred. We slow down to listen to him," Hanks said following the film's screening. "It was always going to be, I think, deconstructing the myth of it to show he was a regular guy who went out for Chinese food. At the same time, there is this mystery. What's his motivation?"

"One of the most wonderful things, too, is he was actually an ordained minister who never mentioned God on his show," Hanks said.

Heller, whose "Can You Ever Forgive Me?" earlier this year garnered Oscar nominations for its leads (Melissa McCarthy, Richard E. Grant), questioned the idea that Hanks -- "America's Dad" -- was so naturally suited the part of Rogers.

"I do think there's this kind of thing that happens where everyone goes, 'Oh yeah, I love Tom Hanks. I love Mr. Rogers. This makes perfect sense,' " Heller said. "That's not an easy performance to give. That's not something that Tom just walks in and puts on a sweater. That is an incredibly raw and vulnerable performance."

The life of Rogers, who died at age 74 in 2003, was last year chronicled in the documentary "Won't You Be My Neighbour" -- a film Hanks cited as part of his extensive research watching tapes of Rogers. With $12.4 million in ticket sales, it was the year's highest-grossing documentary, and its success suggested a widespread desire many feel to reconnect with Rogers.

"There's a reason that everybody feels so connect to him right now. I don't know. Some collective consciousness thing where we all want Mr. Rogers in our life right now, myself included," Heller said in an interview. "I don't know if I could have pinpointed what that was when I started out on this journey. But the world feels pretty desolate right now and divided and angry."

The role could have easily tipped into saintly reverence, something Heller and Hanks were urged to avoid by Rogers' wife, Joanna Rogers. Her husband's altruism, she maintained, was hard work and not easily divined. Hanks said he regretted not absorbing Rogers' teachings earlier.

"I wish that when my son was three years old that he and I sat down and watched half an hour of 'Mr. Rogers' a week," said Hanks. "I would have better understood the role of a parent in saying to their children: 'It's all right if you're sad.' "

The 63-year-old actor added, though, that his wife, Rita Wilson, is less enamoured with how he has adopted the sayings and songs of Rogers.