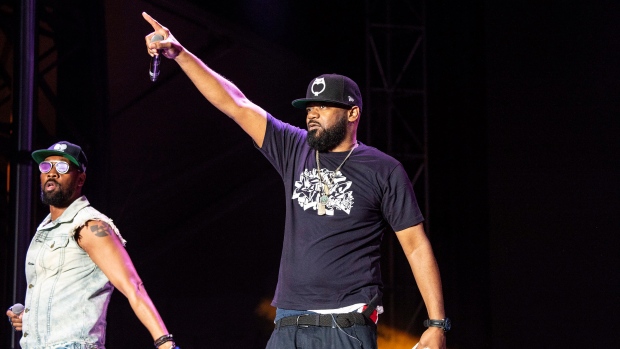 Ghostface Killah of Wu-Tang Clan performs during KAABOO 2019 at the Del Mar Racetrack and Fairgrounds on Friday, Sept. 13, 2019, in San Diego, Calif. (Photo by Amy Harris/Invision/AP)

The New York City-based rap collective announced its official partnership with the Children's Hospital of Eastern Ontario, the Ottawa Food Bank and the Ottawa Mission shelter this morning.

The group is selling T-shirts, hand sanitizer, and meals through their online 36 Chambers store, with proceeds from all three items going to the charities.

The Wu-Tang Clan began supporting the Ottawa Food Bank on April 2, after they were tagged in a tweet by Adam Miron, a local businessman.

The group replied to Miron's tweet saying they had contributed to the Food Bank and encouraging others to join them.

The rap group says that led to an additional $280,000 being donated within the next 48 hours.

Sales of a T-shirt with the Wu-Tang Clan's distinctive yellow and black "W" logo, altered to say Ottawa in its centre, will have all profits go to the Ottawa Food Bank.

A hand-sanitizer called Protect Ya Hands -- a reference to the hit single "Protect Ya Neck" -- is being produced for the Wu-Tang Clan by Jusu Body, a Victoria-based manufacturer.

For every bottle purchased, another will be donated to The Ottawa Mission Foundation and other homeless shelters across Canada, with additional profits being donated to the shelters.

The Saga Continues Bowl will be sold by Pure Kitchen restaurants in the Ottawa area, with the Wu-Tang Clan saying they will donate all their profits from the bowls to meals for front-line workers at the Children's Hospital of Eastern Ontario.

This report by The Canadian Press was first published May 20, 2020.