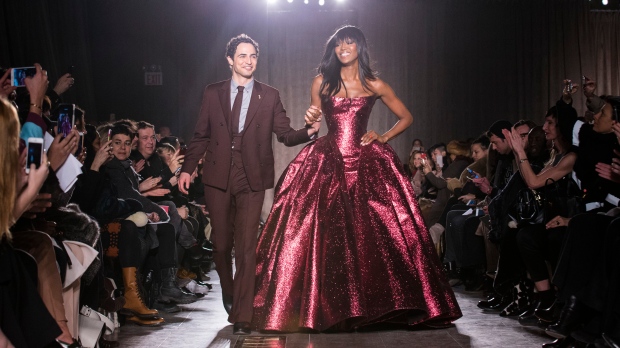 FILE - In this Feb. 16, 2015, file photo, designer Zac Posen and model Naomi Campbell greet the crowd after his Fall 2015 collection is modeled during Fashion Week, in New York. Posen is shutting down his namesake label. (AP Photo/John Minchillo, File)

Posen has been a red carpet favourite for close to two decades, known for glamorous, body-hugging gowns, often with long trains or big, flamboyant ruffles, for stars like Katie Holmes and Rihanna.

An announcement from the label's owners, House of Z and Z Spoke, noted late Friday that the company could no longer continue operations. It had been in a sale process.

Posen, 39, was considered a wunderkind of New York fashion when he launched his label in 2001. He also serves as creative director for the Brooks Brothers women's collection.

“The management team ... worked extremely hard to navigate the increasingly challenging fashion and retail landscape,” he said in a statement Friday. “We are disappointed that these efforts have not been successful and deeply saddened that the journey of nearly 20 years has come to an end. I am grateful to the team who lent their incomparable talent and commitment along the way. I remain incredibly proud of what we created and hopeful for the future.”

Among Posen's many prominent designs was a mermaid-like gown for Gwyneth Paltrow at the Oscars in 2007, an off-the-shoulder gown with brightly sequined skirt for Oprah Winfrey at the Oscars in 2011, and a fitted pink satin gown for Rihanna at the Diamond Ball in 2014. He swathed actress Claire Danes in pastel blue at the 2016 Met Gala, and dressed Katie Holmes at several Met Galas, including this year's when her gown included 3D-printed elements.