HAVANA, Cuba - A coalition of Cuban exiles sailed south from Florida on Friday to protest the island's human rights record with a nighttime fireworks display, eliciting a stern rebuke from Havana officials who called it an affront to national sovereignty.

Organizers said their boats would anchor a little more than 12 miles (19 kilometres) from the Cuban capital, just outside Cuba's territorial waters, and by early evening multicolored explosions could be seen intermittently far off on the horizon from Havana.

Only a handful of people were along the Malecon oceanside promenade amid a steady wind and sporadic rain. Almost entirely missing were the masses of young Cubans who gather to socialize on a normal Friday night.

When an Associated Press crew tried to interview the few who were there, a pro-government crowd of more than 20 people ran across the wide boulevard yelling "American press!" and demanding that a video camera be turned over. Some were holding bottles of alcohol and appeared to have been drinking.

The journalists identified themselves as accredited members of the press with the right to work in Cuba. One cameraman was punched in the face, another's thumb was sprained and a video camera was broken in the melee before the crew managed to leave the scene.

Exile organizers in Miami insisted the 18th protest flotilla over the years would be peaceful and was not a provocation, though they said they were trying to co-ordinate the protest with actions by dissidents on the island. They called on other Havana residents to bang soup pots in solidarity during the fireworks on the eve of International Human Rights Day.

The exiles said they were merely exercising their right to freedom of expression, and the U.S. government said it couldn't legally stop them.

Cuban officials accused them of having malicious aims.

"There's a whole program of provocative acts," said Jose Luis Mendez, an official at Cuba's Interior Ministry. "This is not just about innocuous fireworks. It is subversive."

More than two dozen members of the Ladies in White dissident group, meanwhile, held a literary tea and discussion of the United Nations' Universal Declaration of Human Rights at the house of former leader Laura Pollan, who died last month.

A boisterous crowd clogged the street outside shouting epithets like "worms" at the Ladies and proclaiming support for Fidel and Raul Castro in what is known in Cuba as an "act of repudiation."

The government insists such counter-demonstrations are spontaneous outpourings of revolutionary sentiment, despite thinly veiled co-ordination with state security agents. The street outside the house had been closed to traffic since Thursday.

"We cannot celebrate Human Rights Day here in Cuba. We can't because they repress us and beat us. Right now there's an act of repudiation in front of the Ladies in White headquarters," said Bertha Soler, one of the group's founders. She accused police of blocking some members from joining them.

Other dissidents also reported that government opponents were briefly held to keep them from gathering or protesting, though their accounts could not be independently confirmed.

The government strenuously denies beating dissidents, whom it considers to be common criminals. It accuses them of taking money from Washington to destabilize the island and bring down its socialist revolution.

Flotilla organizer Ramon Saul Sanchez of the small non-profit group the Democracy Movement said about 50 protesters were going in six boats, including an 85-foot vessel and a small security craft. About a dozen members of the news media were following them.

State Department Spokesman William Ostick said federal authorities had met with the organizers to ensure they complied with U.S. and international laws. He said the organizers offered assurances that they would not violate Cuban territorial waters or airspace.

"We have also made it clear to Cuban authorities as well as participants in this event that the U.S. government would punish any violation of U.S. laws," he continued, adding: "The United States government does not promote or encourage this activity."

Nevertheless, Cuban authorities criticized Washington for not blocking the protest.

"That the Obama administration did not refuse to allow this kind of action is a very troubling sign, from the vantage point of it could create situations that nobody wants," Mendez said.

A colleague in the Cuban Foreign Ministry, Rene Mujica, said President Raul Castro's government had communicated its concern to Washington but declined to say whether it had sent a formal protest note.

"The United States is perfectly informed about the Cuban government's concerns regarding this kind of provocations that have been repeatedly made against our country," Mujica said. "They can have consequences beyond their supposed immediate objectives."

The U.S. Coast Guard said it would patrol the area to ensure the protesters stayed more than 12 miles off Cuba.

Past exile actions have included clandestine missions on or near the island. In 1996, the Cuban military shot down two planes carrying activists from the exile group Brothers to the Rescue, killing four members. Cuba maintains the group flew into Cuban territory. The activists deny the allegation. 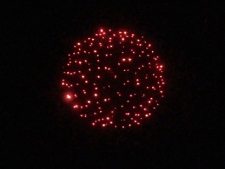 Fireworks lighten up by a coalition of Cuban exiles from boats anchored 12 miles (19 kilometers) from the Cuban capital, just outside Cuba's territorial waters, are seen from Havana, Cuba, Friday Dec. 9, 2011. The boats sailed south from Florida on Friday to protest the island's human rights record by lighting up the night sky with fireworks, eliciting a stern rebuke from Havana officials who called it an affront to national sovereignty. (AP Photo/Franklin Reyes)