The tornado's 15-kilometre track began near Little's Corners and ended near Westover. The greatest damage occurred in Kirkwall.

The damage rating was based on tree damage noted along the storm's path.

The sightings were reported during a nasty storm that put several communities under tornado warnings or watches, brought a barrage of lightning strikes, heavy rain, strong winds and hail, and plunged thousands of homes and businesses into darkness.

All weather warnings or watches have been lifted. There have been no reports of serious injuries.

At the storm's peak, Toronto was under a tornado watch and severe thunderstorm warning, as repeated lightning strikes created a spectacular light show in the sky.

There have been a few reports of damage in Toronto.

It's believed lightning struck a home near Sheppard Avenue East and Meadowvale Road, sparking a fire that spread to a neighbouring home and caused about $100,000 in damage.

The CNE was forced to shut down its midway and close its gates early, while Toronto FC's outdoor match against FC Dallas at BMO Field was called halfway through the game. The match was replayed Thursday morning.

At one point, tornado warnings were in effect in several areas, including Hamilton, Oakville, Mississauga and Brampton. 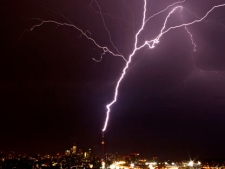