VANCOUVER - Until Thursday, the name Brock Anton probably didn't mean much to most Canadians online, other than his 534 friends on Facebook.

But by the end of the day, he was one of the most frequently discussed topics on Twitter, hundreds of Facebook users were furiously posting diatribes about him, and he became a symbol of the collective anger pouring from Vancouverites in the aftermath of the Stanley Cup riots.

An image shared on the Facebook group "Vancouver Riot Pics: Post Your Photos," which amassed more than 54,000 followers, captures an alleged post by a user identified as Brock Anton.

View a collection of photos from the riots here.

"Maced in the face, hit with a batton, tear gassed twice, 6 broken fingers, blood everywhere," reads the post, alongside a profile photo portraying a man in front of a smashed, overturned car.

The status update goes on to detail how he supposedly punched a police officer in riot gear and participated in the rioting.

Less than a minute after the posting, according to the image, a friend urged Anton to remove the post.

"Brockkkk! take this down!!! its evidence!"

It's possible the image was created as a hoax to rile furious residents who watched their city attacked. Or it could've been a case of overstated bravado on Anton's part, bragging about incidents that never occurred. Either way, his post certainly generated a flurry of online responses.

"It's pretty ridiculous and sad that a person is so out of it that they think this is not only something they can do (but) he's proud of it too, which is pretty horrible," said Ryan Arndt, who started a Facebook group Wednesday night to collect images of rioters in the act.

"Just going around wrecking your own city is very stupid and (I thought) it'd be great to have people use this as evidence ... at trials, if the judges or police think that's appropriate."

It didn't take long before the Facebook group was deluged with requests to join, and Arndt had to recruit three others to help deal with the flood of emails and manually click on each to approve new members.

He eventually directed his group's followers to another that had grown larger, and helped a friend set up a Tumblr blog where non-Facebook users could contribute.

On Thursday, Vancouver police department said it had received 120 tips by phone as of 5 a.m., and appealed to the public to continue sending in their photos and video footage identifying rioters.

"Members of the public are sending us their videos, and we are adding those to the thousands of minutes of video that we shot ourselves. We are fully committed to tracking down these criminals and arresting them for their crimes," said police Chief Jim Chu.

"The public can really help us and help us move beyond this and show the true spirit of Vancouverites by helping catch these criminals who caused all the mayhem and destruction."

Arndt, who had ventured out into the crowds early Wednesday before retreating when things got ugly, said he is happy to see so many online users submitting photos and pledging to help clean up the city.

"It's pretty shameful for Vancouver to have this blight ... on the city, but on the other side we've got all the people who are downtown right now helping to clean up," he said.

On Thursday, separate groups on Facebook and Twitter encouraged residents to head downtown during the next several days to help clean up.

"I've seen quotes from people saying they feel like they're taking back the city and so it's given people some hope, that they can take this over and make something positive out of it."

Arndt had expected the riot would happen but was disappointed when it did break out.

"There was a Facebook event for rioting so it's not like it was a surprise, and I heard people saying on (public transit) that they were going to riot even before the game started." 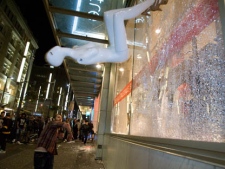 A rioter throws a mannequin at a Granville Street shop following Game 7 of the NHL Stanley Cup final in downtown Vancouver, B.C., on Wednesday, June 15, 2011. (THE CANADIAN PRESS/Geoff Howe) 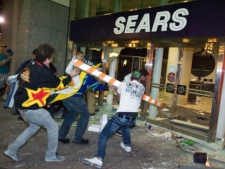 Rioters break the front doors of a Sears department store on Granville Street during the riot following Game 7 of the NHL Stanley Cup final in downtown Vancouver, B.C., on Wednesday, June 15, 2011. (THE CANADIAN PRESS/Geoff Howe)