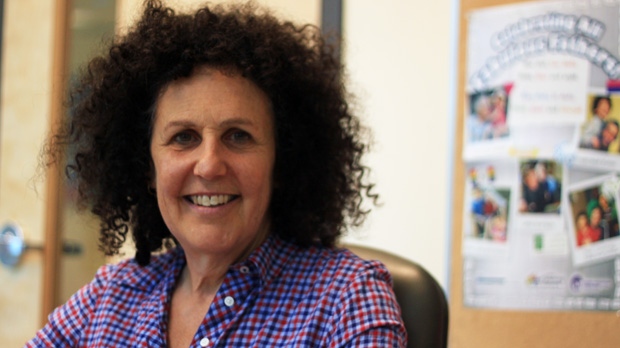 Rachel Epstein, coordinator of the LGBTQ Parenting Network, offers insight into the world of parenting for members of the LGBTQ community. (CODI WILSON/ CP24.com)

For many prospective parents in the LGBTQ community, one of the first steps toward parenthood starts with a trip to Rachel Epstein’s LGBTQ Parenting Network.

For more than a decade, the Toronto non-profit, now located at the Sherbourne Health Centre in the city’s east end, has been a resource for parents with its family planning workshops, manuals, and ongoing research.

Epstein, who founded the facility in 2001, sat down with CP24.com during WorldPride in Toronto to reflect on the progress and nagging obstacles parents in the LGBTQ community still face despite living in a time of "unprecedented legal and social recognition."

Q: What sort of information do you give to prospective parents when they first come to the LGBTQ Parenting Network?

A: We offer, and we do this in partnership with the 519 Queer Parenting programs, four different family planning courses for people who are considering parenthood.

So we provide information about all of the options… The other thing we talk about in those courses is sort of our entitlement as queer and trans people to become parents. Times have changed so much in Canada ...but we still live with a very recent history that said that lesbian and gay and bi and trans people don’t make good parents.

So we still find people coming to our courses not really being sure that the kids will be OK, that this is something they are entitled to, that this is an OK thing to want.

There is a night where we bring in a panel of teenagers that have grown up with LGBT parents because people are very reassured by meeting kids who have grown up in queer families and, 'Wow, look they are OK.'

Q: What are the financial implications when trying to conceive?

A: It can be very costly. We also have a night that we call the fertility fair where we invite the local sperm banks and fertility clinics to come to the course and they can come and bring information about what they offer and their services. Of course often people’s first question is, ‘How much does it cost?’

With donor insemination, it can cost, say you do it once or twice a month, anywhere from $1,000 to $2,000 a month. Again, it adds up fairly quickly. If people for whatever reason move to (in vitro fertilization), that costs us at least $10,000 a cycle. Certainly if you are doing a surrogacy, you are looking at IVF so it can be extremely costly.

There are movements going on to secure OHIP funding for fertility clinic services. We’ll see what happens with that.

Q: What is the ballpark cost for parents looking to adopt?

A: A public adoption is done through the Children’s Aid Society. It is a free process. You have to do a home study. You have to do a course. It takes about a year to get adoption ready. Similarly, if you are doing a private adoption, you hire a social worker who does the home study and who has been licensed as an adoption practitioner. It is just a more costly process… A private adoption can be anywhere from $10,000 to $20,000 dollars in Canada.

A: Certainly, in Toronto, and in some big cities, the Children’s Aid Societies have made a big effort to really open their doors and their minds around LGBT adoption and some people I think really see LGBT communities as a resource… I would say there are more subtle things that go on...So people will get asked in a home study, ‘Oh, you are a lesbian couple and you are going to adopt. Well what about male role models?' There is a real sense of this kind of gender stereotyped idea about what women provide to children and what men provide to children. It is this sense (that) well we just need a man in a kid’s life regardless of who they are.

We’ve done actual training with adoption workers where we spend some time kind of looking at that whole thing. We try to get people to look at some of the deeply embedded assumptions that we have about gender and the ways that those ideas really presume that just because of what you have between your legs, that you are biologically male, that you provide certain kinds of things to children and vice versa. It really also ignores the diversity that exists amongst men and women. Not all men like to rough house and teach their children how to use power tools. Some women do. So those sorts of things come up. Certainly I would say overall, the climate in adoption circles is becoming much more open to LGBT people.

Q: When you became a parent, what was the LGBT parenting landscape like at that time?

Q: How did you explain that issue to her?

A: I would tell her, ‘If we were crossing the border, if they ask who is your mother, say me. They don’t understand families like ours.’ It was very hard for her because it meant that she had to deny one of her mothers and say this person is not my parent, which was ridiculous in her mind but that is what we had to do.

Q: What was your experience with the school system like?

A: I think (my daughter) would say that she didn’t have it too bad. I think there were other kids who had it worse. It is kind of luck of the draw with where you end up, what school you are at, who the teachers are, who the kids are, because we have heard some pretty difficult stories from kids.

The poor kid was very upset … the next morning we were all in there speaking to the teacher.

I think the teacher was a well-meaning, kind of lovely fun Grade 2 teacher but she just wasn’t thinking about who are the kids in her class.

There are many kinds of families. Many kids of diversity and sometimes teachers aren’t thinking.

Q: Is there any legislation that has restricted parental rights in the LGBT community?

A: Really the birth registration system needs a revamping, I think... for two women having a baby ... for many, many years, the non-biological parent was completely without recognition, she had no legal rights. Then there was a case that resulted in second-parent adoption and that non biological parent was then legally allowed to adopt the child. But what it meant was going through a legal process that cost money, that took time. People resented the fact that they had to adopt their own children that they had been caring for since conception.

In 2007, there was a charter challenge saying that was discriminatory… The result of that case was sort of a narrow win, which now allows, if two women have a baby together, they can put their names on the birth registration only if they used an anonymous donor. But if they have used a known donor, they still have to do a second-parent adoption, he has to relinquish his parental rights, etc.

People are still kind of annoyed by that. People still want to identify who the intended parents of their children are right from birth.

Certainly for some trans people, birth registration is complicated. It always says mother, other parent. Sometimes there isn’t a mother. So that whole system looking at how birth registration happens, who gets to register… it hasn’t kept up with what families are actually looking like.

*Answers have been edited for length