Firefighters spent most of Wednesday morning battling a stubborn two-alarm blaze at an abandoned home in Toronto's west end.

Fire crews were called to a burning building on Oakmount Road, just north of Bloor Street West in the High Park area, at about 6:15 a.m. Hours later, crews were still there, trying to put out the last of the flames.

A plume of smoke was visible from kilometres away. Firefighters used an aerial ladder to pour water through a hole in the home's roof.

The house and other homes on the block are slated for demolition to make room for a condominium development.

Neighbours tell CP24 that the house in question has been vacant and boarded up for several years.

Homeless people have been taking shelter in the home, neighbours said.

The fire's cause is under investigation.

With a report from CP24's Cam Woolley 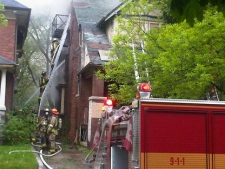 Firefighters battle a blaze at an abandoned home on Oakmount Road on Wednesday, May 25, 2011. (CP24/Cam Woolley)