Toronto Fire Services are trying to pinpoint the source of a foul stench that's lingering in parts of the downtown area.

A fire spokesman said crews were called to the Toronto Star's headquarters at Yonge Street and Queens Quay East on Tuesday morning.

Firefighters went through the building, but were unable to locate the source of the unusual odour.

Fire officials said the stench, similar to that of sewage, appears to have been stirred by Monday and Tuesday's heavy rainfall.

Callers and e-mailers to CP24's newsroom said they smelled the odour near Yonge Street and Front Street and York Street and Bremner Boulevard near the lakefront.

Tune in to CP24 for updates.

People are taking to the Internet to add their two cents about the odour and its source. A hashtag created by CP24 - #whatsthatsmell - is the most popular trending topic with Twitter users right now. 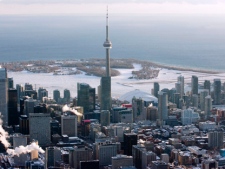 Toronto's City Centre is seen from the air on Friday January 21, 2010. (THE CANADIAN PRESS/Chris Young)