A new poll, commissioned by CP24, suggests outspoken spendthrift Rob Ford may be inching slightly over the competition in the race to take over the mayor's seat in Toronto's municipal election this fall.

However, the survey shows that 38.9 per cent of Toronto voters are undecided, which means that the frontrunners can easily slip to the back of the pack if they fail to impress the electorate.

The poll, which was commissioned by CP24, CTV Toronto and the Globe and Mail, puts deputy mayor Joe Pantalone trailing in third place with 10 per cent support. Liberal backbencher Rocco Rossi the fourth most popular candidate with 9 per cent of the vote.

The results were compiled after a random telephone survey of 1,000 likely Toronto municipal voters between June 7 and June 11.

People were asked "If an election were held today, who would be your first and second choice?"

According to the poll, 17.4 per cent of people say Ford is their first choice because he's fiscally responsible.

"I'm going to watch every cent spent at city hall and they say thank God it's about time," he said. "People are actually thanking me for getting into the race."

Nearly 7 per cent of respondents also said Ford was honest and trustworthy. Only 0.6 per cent felt the same way about Smitherman.

Those who picked Smitherman as their first choice said they like the fact that he has the most political experience.

Smitherman was out of town Sunday at a mayor's conference in China. He couldn't be reached for comment.

Pollster Nik Nanos said no candidate should feel too confident just yet, especially considering the high number of undecided voters.

"With that number of undecided voters we know historically that those voters tend to vote based on how the candidates and their campaigns perform," he said. "(That) means they're going to be sizing up all the different candidates and try to see who will make the best mayor for Toronto."

Respondents were given a chance to pick a mayor from outside the current pool of candidates. About 70 per cent said no one came to mind and 8 per cent said they were unsure.

Among the popular would-be candidates are:

Although a big number of respondents seemed unsure about their choice for mayor, those surveyed were clear on the biggest issues facing Toronto.

The city's overstretched budget and large deficit concerns 20.5 per cent of voters, according to the survey. High taxes (16.7 per cent) and the state of public transit (16.4 per cent) are also big election issues.

But the poll showed voters were least concerned with the Toronto District School Board, parking, user fees, the Island Airport and selling the city's assets.

(However, 57.7 per cent of respondents say they oppose a sale of Toronto Hydro.)

About 11 per cent of those surveyed said they were unsure of which election issue matters most to them.

Other interesting findings include:

To view more details about the poll and its impact, visit the Globe and Mail.

To see the survey in its entirety, please visit www.nanosresearch.com 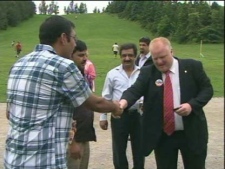 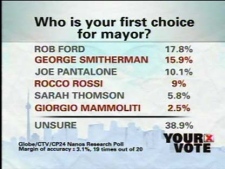 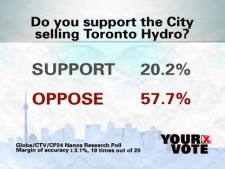