Ford charged in 1999 with failing to provide breath sample

Mayoral candidate Rob Ford has come clean with charges he faced in the past, including an incident where he failed to provide a breath sample in the United States while on vacation in 1999.

The councillor held a press conference just after 9 a.m. after a report in the Toronto Sun said he had been charged with marijuana possession in the past.

Ford was pulled over on vacation in Florida and was found with a joint in his back pocket on Valentine's day 11 years ago while on vacation with his then-fiance. He says he was also charged with failing to provide a breath sample and, through a lawyer, entered a guilty plea for that charge and had the former charged dropped.

He says he was fined and ordered to do community service.

The mayoral canadidate reiterated that since then, he has been elected three times and has been dedicated to representing his constituents with integrity.


"I truly believe this election is not about mistakes I made eleven-and-a-half years ago," he says. "It's about today and tomorrow, and how our decisions today will help shape Toronto for the next ten years."

Have your say on this issue by clicking here. 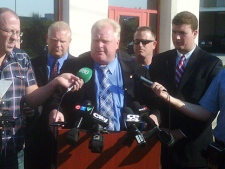